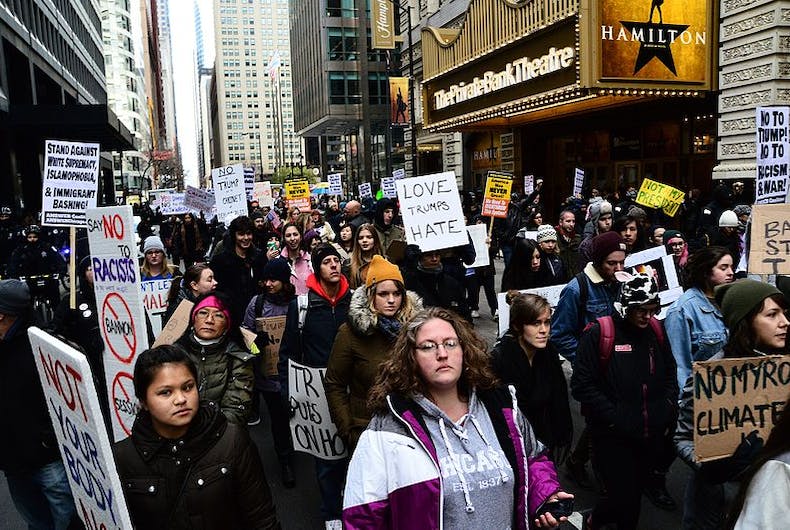 Anti-Trump protests have been numerous and far flung since he took office.Photo: Ben Alexander

The Donald Trump presidency has proved even more scandalous, outrageous, and protest-worthy than was expected.

Whether it’s the travel ban, questions of obstruction of justice in the investigation into Russian interference in the 2016 election, the destruction of the environment, the attack on LGBTQ and women’s rights, or the endless conflicts of interest, the deluge of bad news coming out of the White House can be exhausting.

This is what the Trump administration needs, concerned citizens too disgusted and drained to stand up and fight back against their harmful agenda. We can’t let that happen.

To help prevent it, here are some tips on avoiding burnout so you can keep on resisting. After all, we need to stay sharp and empowered, now more than ever.

Chances are you have like-minded friends and family members who are also looking for ways to have their voices heard. Bring them with you to rallies and other events you plan to attend, especially if this is new territory for them. Watching them discover the power of getting involved in our democracy can reignite your spirits to keep on fighting for what’s right.

Remember that you can also meet new friends in the resistance, so don’t be afraid to go outside of your comfort zone to introduce yourself to your fellow demonstrators.

Carve out time to disconnect from the news to enjoy time away with your loved ones, or some quiet time alone. Meditation can reduce stress, anxiety, and other negative emotions that can come as a result of burnout, studies have shown. Simply sitting quietly, away from screens, for 20 to 30 minutes a day can have a profound impact over time.

Also remember to take care of your physical health by eating well, and getting enough sleep and exercise.

Protest doesn’t have to be all serious outrage and furrowed brows. While unadulterated anger has its place, poking fun at the establishment has a long history as a valuable element in resistance movements.

You can look to ACT UP, the group dedicated to advocating for those living with HIV/AIDS, as a prime example of the power of introducing creativity and humor into their demonstrations. It also makes for a great photo and headline, helping draw attention to the cause.

In fact, as you can see from the photo above, ACT UP brought some theatrical flair to their protest outside of Donald Trump in 1989.

While you track the losses, don’t forget to also pay attention to the victories along the way. In fact, the more dire the situation can feel, the more essential it is for you to focus on the positive to keep from succumbing to exhaustion and depression.

Remember that the willingness of so many Americans to show they refuse to normalize the unprecedented president under whose “leadership” we happen to find ourselves has helped to throw a wrench in the wheels seeking to take us backward. Trump’s agenda has so far floundered under the weight of investigations and intense scrutiny.

Whether it’s the firing of Michael Flynn, the appointment of a special prosecutor to investigate election interference by the Russians, or the, shall we say, lively town hall meetings that played a key role in derailing Trumpcare, the resistance is having an effect. Celebrate that fact, and use it to give you hope going forward.

There are many ways to get involved and maintain invested in the effort to move America forward.

Calling your elected representatives, giving of your time or money to work with an organization working to help members of vulnerable communities, volunteering on a political campaign (those midterm elections are closer than you think), or even running for office yourself are all great ways to make a difference.

Whatever you choose to do, remember that what you do matters, and that continuing to fight for what is right is always worth the effort. Even when it is most difficult.