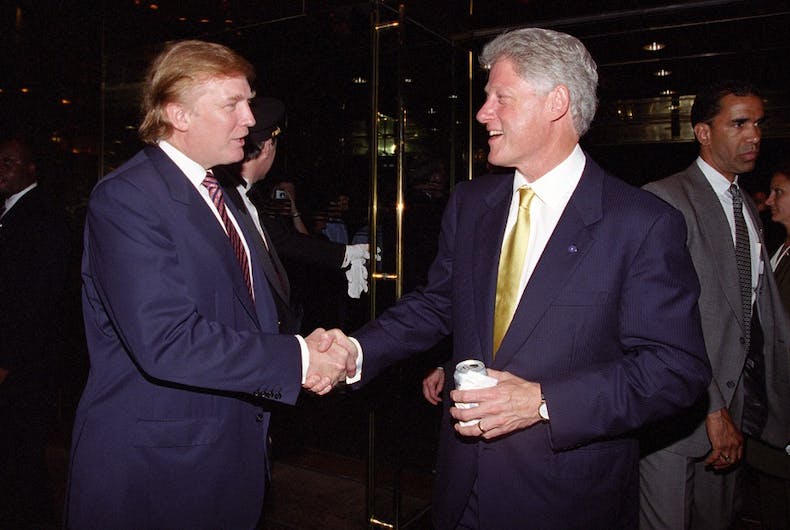 President Trump obviously never heard the old saw that those who don’t know history are doomed to repeat it.

By trying to ban new transgender service members that’s exactly what he’s doing: reliving the strategy and massive mistakes of Bill Clinton’s 1993 attempt to allow gays in the military, which led to the awful Don’t Ask, Don’t Tell policy, a compromise that left no one happy.

By failing to understand, let alone study, Clinton’s missteps, Trump, a former friend of Clinton, has stumbled into his own disaster.

1. Paying back a core constituency

Bill Clinton knew that gay and lesbian voters were key to his success; his presidential campaign was really the first to identify us as a voting segment to mobilize. Letting gay military personnel serve openly seemed like an easy thank-you. Trump, meanwhile, was trying to appease right-wingers in Congress who were threatening to hold up his precious wall on the Mexico border over funding for gender reassignment surgeries for military personnels. As a bonus, he made a lot of religious right leaders, who are core to his base, very happy–to say nothing of Vice President Mike Pence.

2. The military leadership was not consulted

Clinton had promised to consult with military leaders before he carried out his campaign promise, but shortly taking office, he announced he was moving ahead. At least the military leaders then knew it was on Clinton’s radar. Trump never told anyone his plans before tweeting them out, catching his military commanders off guard, leaving them to scramble to react.

3. No matter what the president says, the Pentagon does things its own way

It didn’t matter if Clinton was president. The Joint Chiefs weren’t about to follow through on his order as is (particularly since Clinton was considered a draft dodger). The compromise result was the dreadful “Don’t Ask, Don’t Tell” policy. The draft-dodging Trump is also finding that the military doesn’t jump through the president’s hoops – at least not right away. The Pentagon is moving methodically as it considers how to implement Trump’s ban, which may not end up being as absolute as Trump would have had it.

4. You can’t count on your own party

When Clinton tried to lift the ban, some of the least supportive members of Congress were Democrats, most notably then-Senator Sam Nunn. Trump immediately ran into similar blowback from Republicans, including such hard-core conservatives as Senators John McCain, Joni Ernst and Dan Sullivan.

5. It’s the servicemembers who suffer

Clinton’s well-intentioned effort led to a policy that was an excuse to harass military personnel trying to serve their country. The effect of Trump’s ban is the same, but then that’s the point of it.