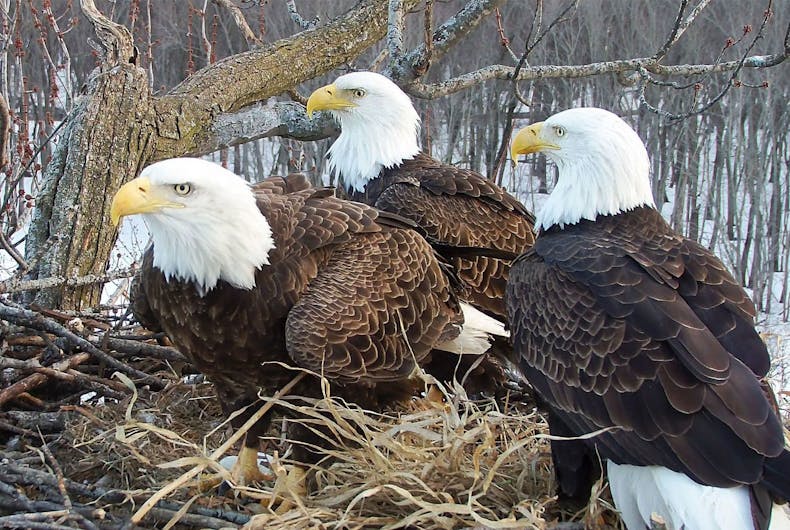 Valor I, Valor II, and Starr are raising three eaglets together in a nest in Illinois near the Mississippi RiverPhoto: National Audubon Society

A rare trio of bald eagles in Illinois are raising eyebrows as the birds model a thrupple relationship. Even more striking, the male birds have been together for years before the female joined the couple.

Valor I and Valor II, the dads, and mom Starr are raising three eaglets together in a nest near the Mississippi River. While bald eagle trios have been documented before, this thrupple is a little unusual.

Both male birds copulate with the female. In the other cases, the second male bird has normally served as a “nanny” for the eaglets.

But even more unusual, it’s not the first time the male birds have been in a thrupple relationship.

Related: No one knows how these lesbian penguins laid an egg

The Washington Post reports that adding Valor II to the mix may have saved their first relationship – and the babies.

Valor I “wasn’t a very good partner or father” in 2015, according to the National Audubon Society. “He was irresponsible about incubating the eggs and feeding the eaglets, which were really his only two jobs.”

“Normally they will switch roles, but what happened was [their first mate] Hope would sit on the nest for a long, long time,” Pam Steinhaus, the visitor services manager at the refuge where the birds live, said. “Valor I would never bring food in, so she’d have to get up and leave to hunt.”

“I think Hope didn’t care for what Valor I was doing, so he got replaced.”

But after Valor II unpacked his suitcase in the nest, things started to change quickly. Valor I pulled his stuff together and started being more parental.

In 2017, tragedy struck as other eagles attacked the thrupple’s nest repeatedly, and Hope was lost. The male birds successfully fought off the attackers each time and continued to raise the eaglets together until it was time for them to fly the nest.

“Valor I and Valor II boldly defended the chicks and prevented the marauding eagles from entering the nest and no injuries were observed,” the sanctuary stewards explained. “Daily attacks occurred throughout April with an occasional flyby in May.”

Starr joined the couple last fall, laying three eggs. The eaglets will fledge in the next few weeks and you can watch the action live via a webam set up in the park.