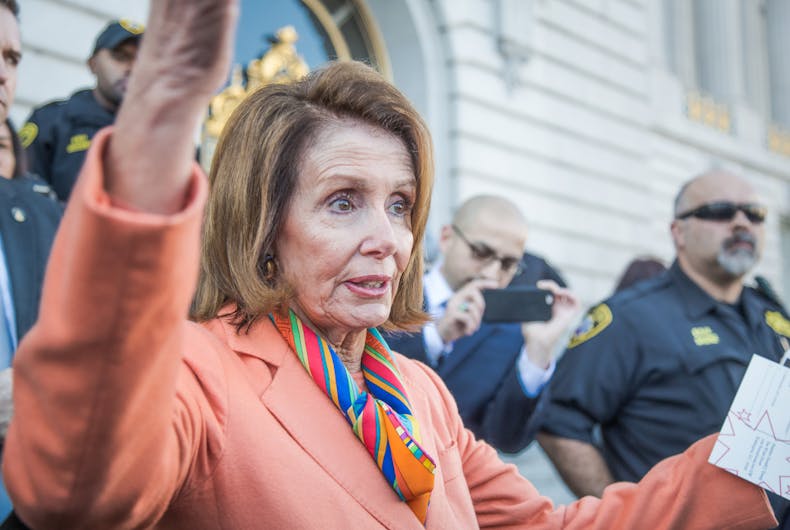 Here’s how we could have a Democratic President as early as 2019. Imagine, President Nancy Pelosi.

First, a caveat. This outcome will require an awful lot of things falling into place almost perfectly. It will require perhaps the most unpredictable politician in the free world act predictably.

The good news is that, while it may be a long shot, some of the pieces are already in place.

The first thing that has to happen is the Democrats have to take back the House. That’s something Democrats are already working on, by taking advantage of Donald Trump’s disapproval ratings and running strong candidates in vulnerable Republican districts.

On the downside, Democrats run the risk of electing some less-than-progressive candidates, just to have more seats held by people with Ds after their names, if not progressive values in their hearts.

But assuming Democrats pull it off, and retake the House, one of their first acts will very likely be to re-elect Nancy Pelosi as Speaker of the House. There just aren’t many other candidates as qualified as she is.

Finally, House Democrats will be positioned to bring impeachment charges against Donald Trump and Mike Pence. If his recent television interviews are any indication, Trump will probably give them all the ammunition they’ll need to take him down.

He just can’t help himself.

We’ve arrived at a point where Trump calls up Fox News in the morning and practically sets his hair on fire. Stunned hosts can’t hang up on him fast enough to save him from himself, and by lunchtime, his own words get used against him in court.

Trump being Trump, that’s the easy part. The tricky part will be getting Trump to continue behaving as he (un)predictably does.

If Donald Trump responds to impeachment as he does to most setbacks, he’ll follow the pattern most of his business partners recognize by now. He’ll declare success, abandon the mess, taking his brand and his profits with him and leaving his business partners — in this case, the GOP — holding the bag.

If it looks like House Democrats have the goods to impeach him, Trump will most likely resign, while declaring his administration a roaring success, complete with his own fabricated “facts.” He’ll probably take an equally disgraced Mike Pence down with him or Democrats can continue impeachment proceedings against Pence alone for his role the administration’s ties to Russia.

All that’s left then is to install the next person in line — House Speaker Nancy Pelosi — as president, and listen to the sounds of conservative heads exploding.

And it could all happen in less than a year.

Cancel reply
A Democratic president in 2019? It could happen.