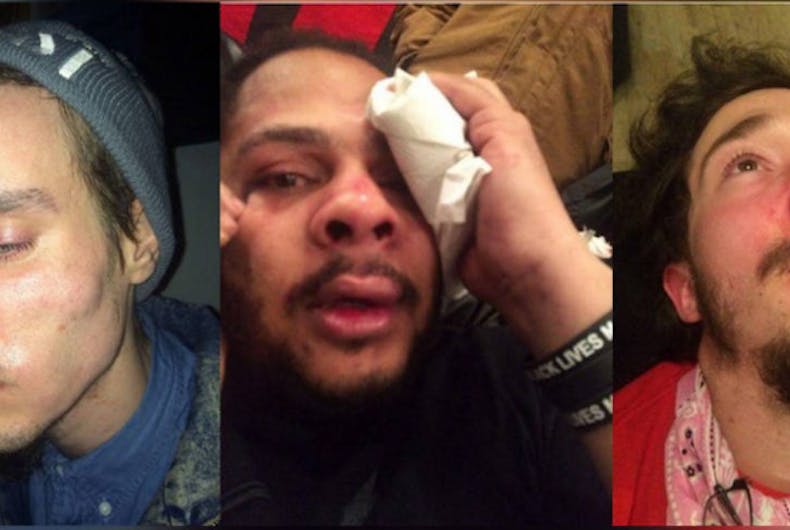 After leaving a party and heading to a restaurant, a group of nine activists say they were attacked by four men who shouted, “Trump, Trump, Trump!” and “Blues Lives Matter” and called them “communists” and “faggots.”

They report that the men, said to also have been wearing “Blue Lives Matter” bracelets, quickly escalated from verbal intimidation to a physical attack.

Activist Peter Soeller told reporter Alex Rubinstein that the party they were attending was to mark the end of their three-month campaign organizing event space “Decolonize This Place,” and that they were chanting slogans often heard at political protests when the men approached.

Another member of the group, Patti Cruz, who shared photos of the aftermath of the violence on Facebook, said there was “no time to film this racist and disgusting attack because some of us were too busy trying to pull Trump supporters off of Colin and the rest of the comrades.”

“It got violent really quickly because they had the intention to fight. They were not there to troll. Either way, they were going to hit us at some point. I ran to Decolonize This Space and asked for a medic. Then the police came and separated the fight. It was probably in the window of 10 minutes,” witness Michael Basillas said, adding, “this is what we’re going to be doing for the next four years.”

“I don’t even want to say they are alt-right because it politicizes the narrative when it’s really just queer bashing. The media is going to look at it like it’s the radical left versus the alt-right, but people can ostensibly see that the people that were targeted were queer, black and non-cisgender,” said Caribou, of the group Bash Back NYC, who reports having caught the tail end of the assault.