The first GetEQUAL action that I ever witnessed was in September of 2010, when a group of about two dozen protestors stood on a street corner in the Castro, waiting for the light to change, and then marched out into the middle of the intersection to unfurl a giant traffic-blocking banner:

“When jobs are lost, the market stops,” it read, a little wordplay since the street they were blocking was Market Street.

I’m lucky to have always worked in LGBT-friendly bubbles.

At a creative company in San Francisco, there’s little risk to being out in the workplace. But I know that not everyone can be so fortunate. As easily as I settled in California, I could have wound up in one of the 29 states where I can lose my job because of who I love — or one of the 34 states where my trans friends can be fired over a pronoun.

I firmly believe that marriage is an important cause for the LGBT community, and I’ve dedicated the last few years of my life to the fight for marriage equality.

But sometimes I’m surprised that employment protection doesn’t get more attention. Is it because marriage is a more fun topic than work is? Maybe. But like those GetEQUAL activists pointed out, we all depend on jobs. Why aren’t we more up in arms about ENDA?

It’s a subject that’s on a lot of minds this week, with the Obama administration declining to sign a nondiscrimination executive order.

The order would have barred federal contractors — many of them military — from discriminating against LGBTs in employment. Who could disagree with that? Executive Order 11246 has been in place since 1965, and bars similar discrimination on the basis of religion, gender, or ethnicity.

Why not add sexual orientation and gender identification to the list?

It’s a question to which I still haven’t heard a satisfactory answer.

When reporters pressured Press Secretary Jay Carney for an explanation, he dodged the issue — over and over and over. Something about this particular moment in history, it would seem, just isn’t the right time to support LGBTs’ right to work.

So what gives? What’s made his support slowly slip away, while the LGBT workforce continues to suffer the fear that we could lose our source of income at a moment’s notice and for no legitimate reason?

Your guess is as good as mine. We’ll just have to ponder why, 200 days from Election Day, President Obama would be so reluctant to stand up for our jobs.

Meanwhile, Obama’s opponents are making hay out of his decision.

“President Barack Obama has turned his back on 1.8 million LGBT workers who need these protections for their livelihood,” wrote R. Clarke Cooper, Executive Director of the Log Cabin Republicans. “LGBT voters, particularly those looking for work in this economy, should remember this in November when Democrats try to tell us how much better they are on our issues.”

It’s fair to point out that Obama is letting us down with this executive order. But then again, the suggestion that the Republican nominee for president would have signed the order is simply laughable.

Do the Log Cabin Republicans really believe that Mitt Romney — or heaven help us, Newt Gingrich — would be better on nondiscrimination than Obama?

Meanwhile, after decades of pressure, ENDA continues to languish. There was some real optimism back in 2010 that it would pass during the lame duck session after the November elections. Everyone knew that Republicans would be big winners in that election, and so many in the community held on to a slim hope that departing Democratic lawmakers would find the courage to support the bill.

“The chances of seeing action in lame duck are unfortunately better than right now before the elections, just because of the limited amount of time that is left,” HRC spokesman Michael Cole told me at the time.

But Robin McGehee ultimately proved to be the better fortune-teller: “I find it difficult to believe that the Democratic leadership will suddenly find the moral courage they’ve been lacking for years in order to get this done,” she wrote.

It’s been a year an a half since we heard those words. And now the President won’t even sign an executive order to cover federal contractors.

With marriage issues on ballots from Maine to Washington, we’ll see more progress on marriage in 2012 than we ever have in any prior year. But when it comes to employment, it seems like we’ve stagnated.

And I keep thinking back to that GetEQUAL action in the Castro. At the time, onlookers were bewildered: why are they holding up traffic here, in the Castro, where everyone already agrees with them?

But one of the most important lessons we’ve learned from the fight for marriage was that agreement isn’t enough — there has to be action. And maybe it’s a lack of action from the community that explains the President’s actions.

Opinions and advice expressed in our Views & Voices columns represent the author’s or publication’s own views and not necessarily those of LGBTQ Nation. We welcome opposing views and diverse perspectives. To submit a article, column or video, contact us here. Due to the volume of submissions received, we cannot guarantee publication, however you are invited to express your opinion in the comment section below.
Categories: Commentary
Tagged: Discrimination, Employment Non-Discrimination Act (ENDA), Workplace 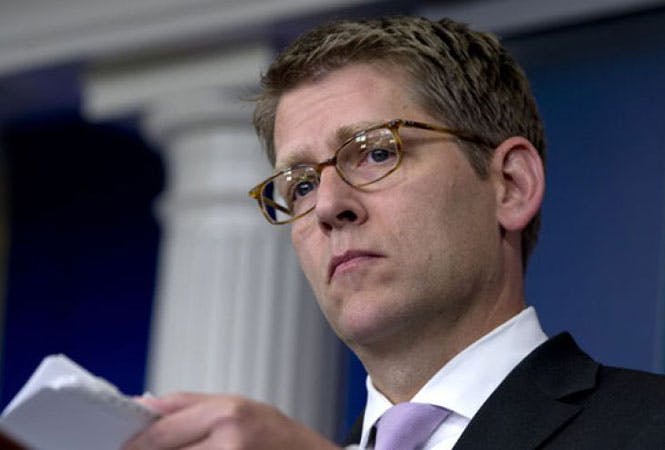 APJay Carney In 2008, then-candidate Barack Obama pledged that if elected president, he would use an executive order to protect the LGBT employees of all federal contractors…

Cancel reply
After decades of pressure, ENDA continues to languish — What gives?