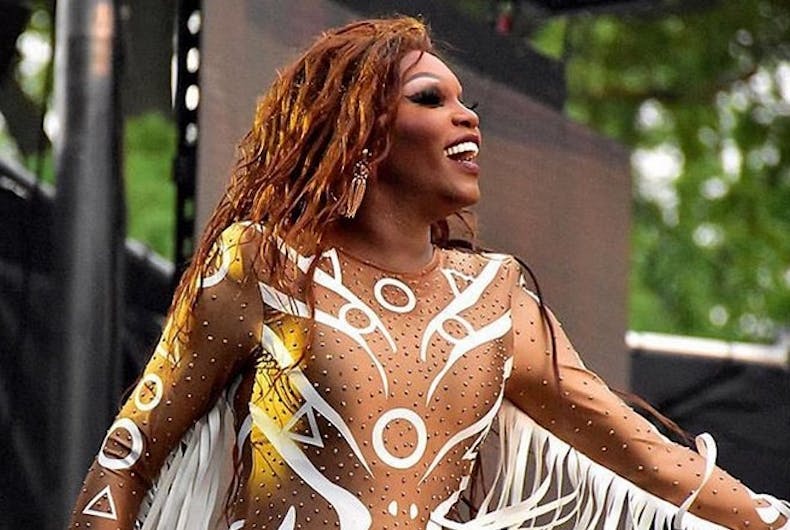 This post contains spoilers about the final episode of season 10 of RuPaul’s Drag Race.

Last night’s final episode of RuPaul’s Drag Race didn’t just upset fans who were rooting for one of the queens who lost. Animal lovers were also upset by one of the performances.

Asia O’Hara, one of the final four contestants on season 10, lipsynced against Kameron Michaels.

Asia’s dress and wig were covered with colorful, plastic butterflies, and her oddly shaped breasts were obviously hiding some kind of trick.

Performing to Janet Jackson’s Nasty, Asia first opened a box attached to one of her wrists. In it was a butterfly… that refused to fly.

She had the same thing on her other wrist, and then she opened her breasts to reveal netting and some more butterflies that weren’t moving. The camera zoomed in on the butterflies crawling on the floor.

Clearly, this didn’t work as planned. Asia explained what happened to Entertainment Weekly:

I used what are called Painted Lady butterflies, and going west across the continental divide, they have to be kept cool — basically in hibernation or asleep — so they don’t stress. They need to warm up to a certain temperature in order to fly away. I, of course, rehearsed it at home several times and it worked, but [the finale was] a different place and a different environment, and I don’t think the contraptions were warm enough to wake the butterflies up. But, as they warmed up in the stage lights during the break, they started to fly away!

She said that this sort of butterfly release is now a common feature of weddings and bridal showers.

“Despite months of research and rehearsing with a professional company, what I hoped would be an amazing and safe display of optimism and a surprise for everyone including the production and the network, it did not go as planned,” she wrote. “I would like to publicly offer the entire world my deepest apology.”

“It’s important that everyone knows that I would never purposely hurt any living being and have the utmost respect for all animals,” she added.

She said that she is going to donate 100 volunteer hours to the American Society for the Prevention of Cruelty to Animals (ASPCA) to “make it right.”

This is the first time a season of RuPaul’s Drag Race has ended with an apology for animal cruelty.