Three men in a relationship who are raising children together and even got all their names on their children’s birth certificates are opening up about their journey to parenthood.

“We’re just three tame, regular people who spend a lot of time talking about what to have for dinner,” said Ian Jenkins, a doctor in San Diego who is also the author of a new book about his family with three dads. “After the first few minutes of meeting us, people realize that.”

Related: California is named after a Black lesbian queen

Jenkins and Alan have been in a relationship for 17 years and eight years ago they opened it up to Jeremy.

“Having him around put [Alan and I] more in the mindset of being parents,” Jenkins told the HuffPo.

Jeremy also had a friend with extra embryos from IVF that they weren’t going to use, so the three men decided to adopt them. With the help of a surrogate, their first child Piper was born in 2017.

They said that their home state of California is generally welcoming and accepting, which made their nontraditional family easier to form, but they still had to push to get their parenthoods recognized by the state.

At the surrogacy hearing – usually a quick procedure where a judge puts a child’s parents on their birth certificate – all three men asked to be on the birth certificate and the judge initially refused, saying that she didn’t have the power to set that precedent.

“She said you’re going to have to have a law passed or appeal,” Jenkins said. “I was like, ‘I just want a kid ― I don’t want a legal battle.’ It was like ice water being thrown on us.”

Then Alan went “full mama bear,” Jenkins said, and “basically interrupted the proceedings and told them to swear us all in.”

“We all gave very tearful testimonies about why we needed to become parents. You could see the emotion on the judge’s face. She looked at all the options in front of her and found a way to use existing laws to give us the first birth certificate of its kind anywhere.”

Piper is the first known child to have three dads on her birth certificate from birth, paving the way for Parker, who was born over a year later.

“If you’ve ever seen a courtroom drama where the innocent person gets off at the end ― it was like that.”

The men had to fight to all get on the birth certificate, but they didn’t want media attention at the time.

“We didn’t want them to become a target of teasing or bullying or online abuse,” Jenkins said.

Now he has a book about their experiences – Three Dads and a Baby: Adventures in Modern Parenting – due out in March. He said he’s hoping it can help parents of nontraditional families in less accepting areas.

“I really worry about someone who lives somewhere that’s not as accepting as California and wants to live this kind of life and can’t move,” he said. “I’m hoping this starts the wheels turning that families come in lots of different arrangements.”

For the moment, the men are doing their best to raise their kids in a loving environment, just like any other parents would. Jenkins said that the key to raising children in a polyamorous relationship is communication.

“When our oldest develops the ability to have a tantrum like a reactor breaking down in Chernobyl, we all have to be on the same page and have a consistent parenting style. What’s the best approach? How much time for a time out? What do you call it? Does the parent need help or is it adding fuel to the fire?”

He said that he knows some people might be cruel to the kids one day, but the dads are letting the kids know that they are loved and helping them grow up healthy.

“One can never predict what will happen, and teasing is part of basically every upbringing, but we’re raising these children with a really careful joint process,” he said. “We’re always talking about how to raise emotionally healthy, giving but strong children, free of some of the toxic parts of our culture.” 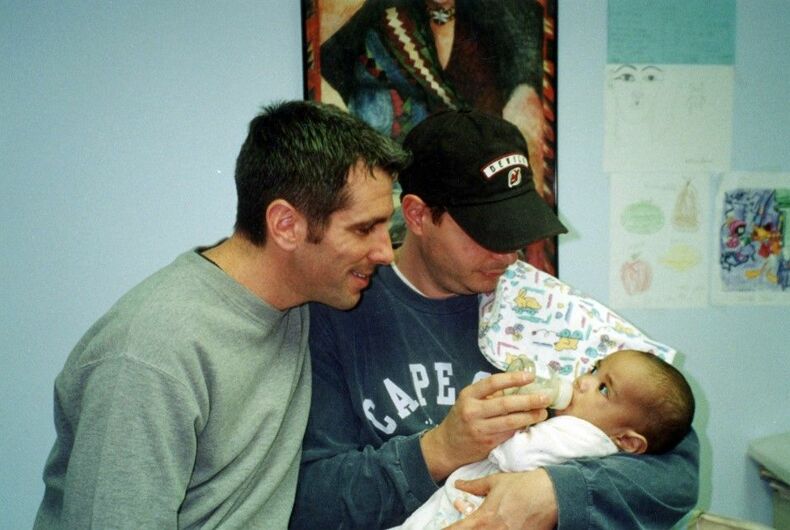 The happy family in 2001Photo: Pete Mercurio On August 28, 2000, 32-year-old Danny Stewart was going back home to his partner, Pete Mercurio, in Manhattan…