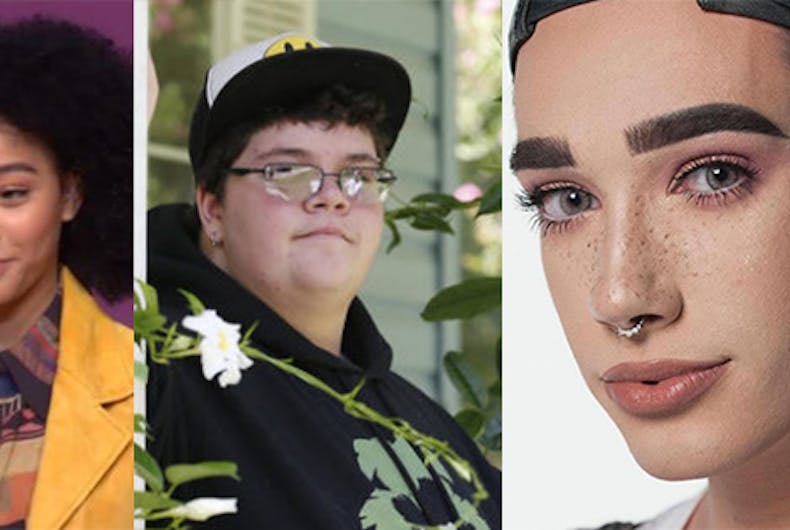 Grimm is at the center of a battle over the rights of trans students to use the bathrooms matching their gender identity. The Supreme Court may soon hear his case against the school district blocking him from using the boys’ restroom.

“After teaming up with the American Civil Liberties Union to sue his school district for banning him from the boys’ bathroom, he was subjected to enormous scrutiny by the media and people in his community. The precedent his case sets could affect the lives of thousands that come after him,” Time writes.

“It was never a question of ‘Do we do this?’” they quote the 17 year-old as saying. “It’s just not in my nature to give up so easily when my rights are being violated.”

James Charles, also 17, became an internet sensation after his school yearbook picture went viral. Charles didn’t like the way the first round went so he asked if he could bring in his own lighting equipment for the re-shoot, which included a good bit of makeup as well, and the results were impressive enough to catch not only the internet’s attention but also the folks at CoverGirl, who made him the first ever CoverBoy.

“For more than 50 years, CoverGirl models have always been female and often been famous. That all changed with Charles, a high school student from Bethlehem, N.Y.,” Time writes. “Now Charles, who has more than 700,000 followers on Instagram, is slated to appear in print, television, and digital campaigns for the cosmetics titan, both by himself and with celebrity brand ambassador Katy Perry. ‘Hopefully other people will see this,’ he told the New York Times, and get inspired to ‘express themselves in a manner they haven’t been comfortable doing before.’”

Amandla Stenberg, 17, is most familiar to audiences from her role in “The Hunger Games.” She recently came out as bisexual and nonbinary.

“Stenberg has become one of her generation’s leading social activists, especially regarding race, representation and gender identity,” Time writes. “As a result, she’s earned some high-profile admirers. Among them: Gloria Steinem, who sat for a one-on-one interview with Stenberg for Teen Vogue, and Beyoncé, who cast Stenberg in “Lemonade” —and told her she wants her own daughter, Blue Ivy, “to be just like her.”

Maisie Williams, 19, who plays Arya Stark on “Game of Thrones,” also made the list. She has rejected labeling her sexual orientation when asked.

“I fall in love with personalities and not people or genders,” she has said.

“But the actress isn’t just one of HBO’s biggest talents—she’s one of the Internet’s most beloved TV stars, able to drive countless headlines with a single tweet, stunt or post, especially if it’s related to the show,” the magazine says. “Williams also speaks out on a number of social and political issues, including feminism (‘You are either a normal person or a sexist’) and the refugee crisis (‘Where is the humanity that makes it acceptable for [children] to languish in refugee camps—in Europe?’).”

Jaden Smith, 18, was honored as well, in part for his clothing line and arts collective called MSFTSrep, through which he tries to help subvert traditional gender norms in fashion.