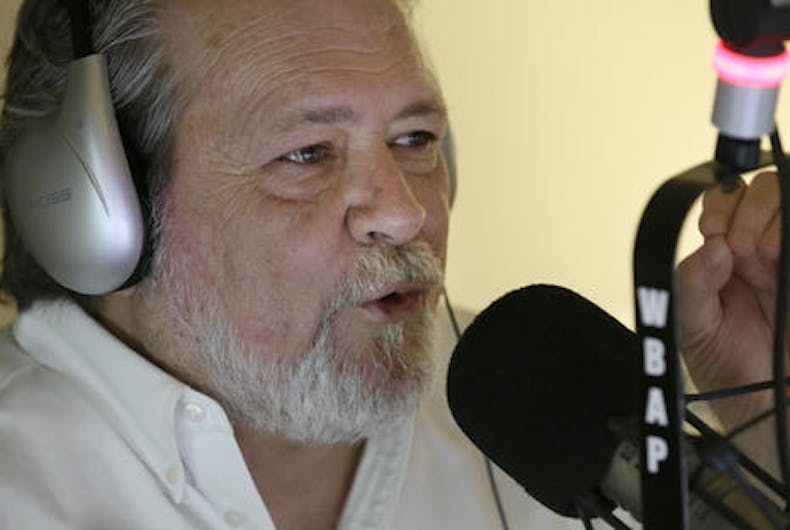 Radio talk show host Rick Roberts speaks during his program in Dallas on Tuesday, Sept. 6, 2016. Roberts dismisses the concept of white privilege. His parents were never in his life, he says. He was left in the care of grandparents and, when they grew too old, he was emancipated at age 15 and landed at a boys’ ranch. “I fell on my ass more than I can count,” the 53-year-old says. “I didn’t feel real privileged at the time.” He scraped his way up, earned an MBA and law degree, and before starting in radio 22 years ago, made a career negotiating offshore oil contracts. Photo: (AP Photo/LM Otero)

DALLAS (AP) — The voices cascade into the studio, denouncing political hypocrisy and media bias and disappearing values. Hillary Clinton is a liar and a crook, they say; Donald Trump is presidential and successful. By the time the 16th caller reaches the air, Rick Roberts’ show has reached an impassioned crescendo of anger and lamentation.

“I want my country back,” he begins.

He repeats that sentence a half-dozen times in a 4½-minute rant that darts from fear of crime to outsourced jobs to political correctness. He pans soulless politicians and has-been celebrities and psycho-babble hug-a-tree experts; he pines for a time when everyone spoke English and looked you in the eye and meant what they said. It’s a fervent soliloquy that dismisses transgender people and calls for faith to regain public footing and for economic opportunity to return.

This is a white male voice preaching to a largely white male audience that has expressed many of the same sentiments, in dribs and drabs, in hushed watercooler conversations and boisterous barroom exchanges, around kitchen tables — and most of all, in the course of a presidential campaign in which Trump has become their champion and their hope.

Certainly, not all white males agree. But at this moment in American history, to be white and male means, for many, to question what happened to the opportunities once theirs for the taking, to see others getting ahead and wonder why, to feel centuries of privilege and values slipping away.

“They’re taking everything from us,” says one of the day’s callers, Stephen Sanders. “I don’t want my community changed.”

The callers express resentment of immigrants who came here illegally, suspicion of Muslims, disdain for gays. They rail against a coarsening of culture, while backing a man who brags about making unwanted sexual advances. They voice bitterness toward a society they see as rallying to save an endangered animal or to lobby for the bathroom rights of transgender children, while seeming to ignore their own pain.

To many, the notion of white men being marginalized is ludicrous, their history a study in power and privilege, from the Founding Fathers to the “Mad Men” era and through their continued dominance in boardrooms and government. Yet they have suffered some real losses, even as they maintain advantages:

These are among the changes that have sent white men to Tea Party gatherings, to fractious town hall meetings and, more recently, to Trump’s rallies. Some argue, though, that their rage has been misplaced.

“What’s made their lives more difficult is not what they think,” said Michael Kimmel, a Stony Brook University professor who studies masculinity and wrote the book Angry White Men. “LGBT people didn’t outsource their jobs. Minorities didn’t cause climate change. Immigrants didn’t issue predatory loans from which they now have lost their houses and everything they ever had. These guys are right to be angry, but they’re delivering the mail to the wrong address.”