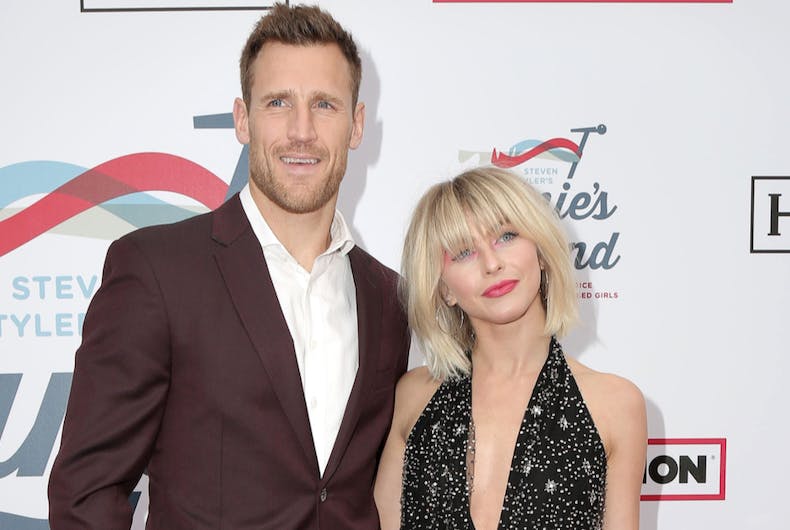 America’s Got Talent judge Julianne Hough came out in Women’s Health Magazine, saying she’s “not straight.” Hough is married to pro hockey player Brooks Laich and did not define her sexual orientation beyond that.

In a wide-ranging interview for the magazine’s “Naked Issue,” Hough talks about a new exercise and lifestyle program she’s developing and how it has led her to a process of radical rediscovery of her own life goals. Laich has been supportive of her evolution, she says, and continues to be.

Hough’s “massive transformation” started shortly after she married Laich, she says. A professional dancer and singer (as well as reality show judge), she says dance is what kindled her search for a higher purpose.

“Dance is my superpower, and it has been my whole life, but I didn’t even know it,” she told the magazine.

Learning how to best teach others to let loose, embrace themselves, and dance for exercise and better mental health led her to some amazing places, she said.

Related: Lil Nas X had the best clapbacks to all the homophobic hate he’s gotten since coming out

“I was connecting to the woman inside that doesn’t need anything, versus the little girl that looked to him to protect me,” she said. “I was like, ‘Is he going to love this version of me?’ But the more I dropped into my most authentic self, the more attracted he was to me. Now we have a more intimate relationship.”

“I think there’s a safety with my husband now that I’m unpacking all of this,” she continued, “and there’s no fear of voicing things that I’ve been afraid to admit or that I’ve had shame or guilt about because of what I’ve been told or how I was raised.”

“I’ve been de-layering all the survival tactics I’ve built up my whole life,” she said. “Now, I feel limitless.”

Laich does, indeed, seem to be entirely supportive of Hough’s decision to live her truth. Shortly after the publication published the interview, he tweeted that he is “so proud of my wife… for the woman she is and her courage to share her journey of trials and triumphs.”

So proud of my wife juleshough for the woman she is, and her courage to share her journey of trials and triumphs! You can learn more about it below, and join the movement she is creating surround personal… https://t.co/xuysAS92W0

Categories: Life
Tagged: America's Got Talent, celebrity coming out, Coming Out, Footloose, Julianne Hough, So You Think You Can Dance