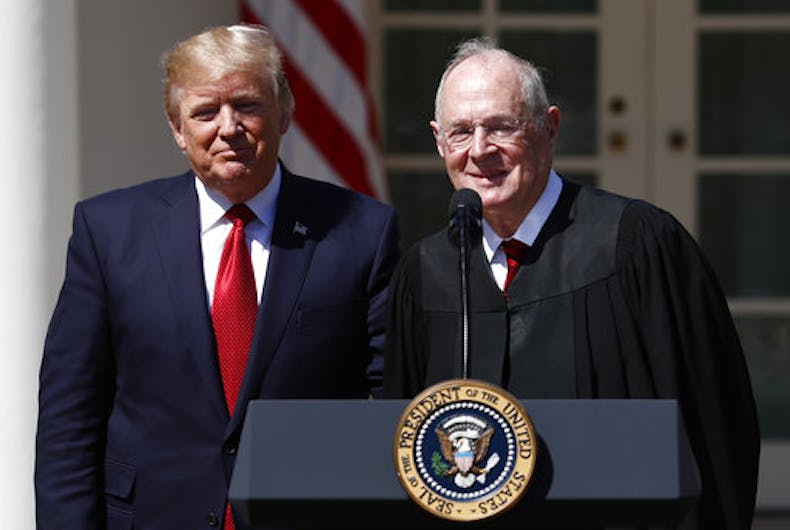 FILE – In this April 10, 2017, file photo, President Donald Trump, left, and Supreme Court Justice Anthony Kennedy participate in a public swearing-in ceremony for Justice Neil Gorsuch in the Rose Garden of the White House White House in Washington. As one justice settles into his new job at the Supreme Court, is another about to leave? Photo: (AP Photo/Carolyn Kaster)

We know that Supreme Court justices traditionally announce their departure from the bench when the Court ends its term in late June. Fresh off their victory at the appointment of Neil Gorsuch–the only victory that Republicans can claim despite controlling two branches of government–they began speculating that you would be the next justice to step down. We don’t need to remind you that June also marks the second anniversary of Obergefell v. Hodges, your masterpiece ruling in favor of marriage freedom.

President Trump, in his typical hamfisted way, has spoken openly about the rumors, while Sen. Charles Grassley, the head of the Senate Judiciary Committee, told reporters this spring that “I would expect a resignation this summer,” pointing to you in everything but name. Some of your former clerks suggest that you won’t stay on the Court much longer as well.

At 80 years of age, and with nearly 30 years on the Court, you have served the nation well and deserve a restful retirement. But sometimes our wishes and our duties to the nation and the constitution are in conflict. We would suggest that this is one of those times.

You’ve contributed many opinions over the years, but there is no doubt that your greatest legacy will be your advancement of LGBTQ equality, of which you are rightfully proud. Never has the Court had a more eloquent and fervent advocate protecting the rights of sexual minorities. The four landmark rulings of the past 25 years are all owed to you. First came Romer v. Evans, the challenge to an anti-gay ballot measure in Colorado. In that 1996 case, you wrote banning nondiscrimination measures was “inexplicable by anything but animus,” incredibly powerful words from a Court that ten years earlier had upheld sodomy laws.

Then came your ruling on those very same sodomy laws, which the majority struck down in 2003. In that opinion, you wrote that the law protects adults, including gay adults, who are engaged in sexual acts in the privacy of their own homes. These opinions, which followed major shifts in public opinion, were made all the more poignant by the fact that you were appointed by a Republican and were considered a conservative Catholic legal scholar.

Those two opinions alone changed the landscape for us, giving us legal protections that we never had before. But they were just the start. Then came the marriage rulings. First, you wrote the majority opinion striking down the odious Defense of Marriage Act, and then two years later came back with the eloquent majority opinion that made marriage legal once and for all. We are hoping it is the final word on marriage equality.

As you know better than anyone, your retirement would put many of those gains in jeopardy. The list of your potential replacements makes your late colleague Antonin Scalia look like Ruth Bader Ginsburg. The very animus that you decried in your first major gay ruling is still alive and well among your fellow judges. Most of your rulings were 5-4 decisions. Your departure would tip the Court in the direction of the dissenters, making them the majority.

Also, remember the undemocratic way the Republican Party is recreating its majority. We know you rise above partisanship, and are secretly appalled that the Senate blocked President Obama’s extremely well qualified appointee who was then replaced by a Trump appointee–despite the fact that Trump won far fewer votes not just than Obama but Hillary Clinton as well. This court stacking could take years to undo.

So we ask you: Please don’t go. Not in the middle of a Trumpian constitutional crisis. Not yet, at least. We ask you to at least wait until after the midterm election when we have fighting chance of a Senate majority that will block any closed minded appointees.

Your presence on the Court is the only thing that guarantees our rights remain whole, and that progress continues apace. The type of conservative judge who would replace you may not be able to overturn your rulings outright, but he or she will pick away at them, limiting and eroding them at every possible turn. The generosity of spirit and common decency that your rulings reflected likely will not be found in your successor. The extreme GOP ideological vetting process for that person will guarantee a sterling record of antigay rulings.

We know it’s asking a lot. But we’re not just thinking of ourselves. We’re thinking of your legacy. Waiting a few more years to ensure that it lasts seems a fair request.

We respectfully hope that you agree.

Write your own open letter to Anthony Kennedy in comments below. LGBTQ Nation and our sister site, Queerty, will bundle the letters together and personally deliver them to the Supreme Court in time for the second anniversary of marriage equality June 26. 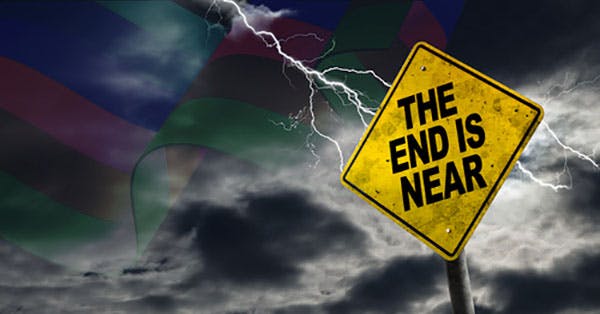 People tend to regard history as a stream of progress that only flows one way. The LGBTQ rights movement has experienced great success over the…