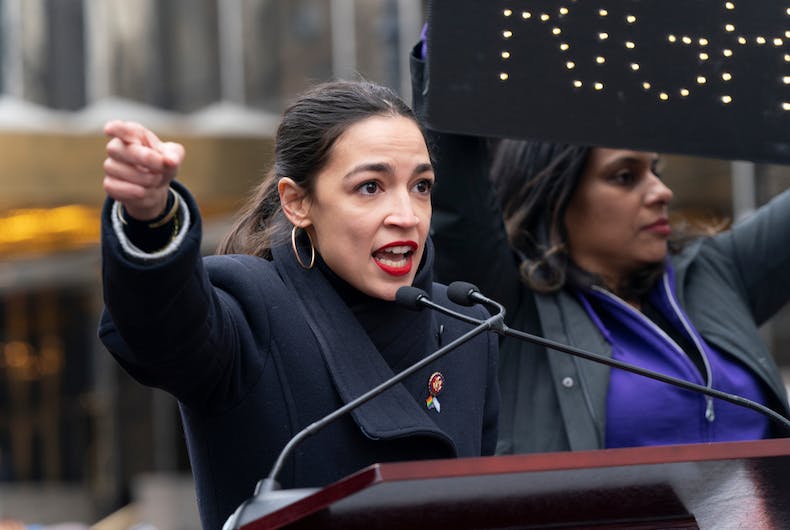 Rep. Alexandria Ocasio-Cortez (D-NY) has unveiled new merchandise online. One item, a crewneck sweatshirt entitled “Tax the Rich,” instantly went viral for its apparently high price tag. Originally retailed at $65, it has since been marked down to $58 for preorders.

Immediately, conservatives jumped on the opportunity to criticize the congresswoman who has often decried the downfalls of capitalism.

Newsweek claimed that Ocasio-Cortez was getting “ridiculed mercilessly.”  Right-wing media organization PragerU claimed it was a “rip-off” that was “Marxism 101.” Fox News contributor Lisa Marie Boothe sniped, “what percentage of AOC fans do we think are extremely wealthy?” Sean Hannity’s website wrote that they “can’t make this up.” TheBlaze.com claimed she was “getting destroyed.”

Daily Wire contributor Harry Khachatrian tweeted that it was “precisely what you’d expect well-heeled liberal denizens of New York’s Upper East Side to wear,” such as “Leonard Bernstein and his glitterati” would while “hanging out with Black Panthers in his penthouse,” in reference to the late composer of the operetta song “Glitter and Be Gay” and his association with the political group.

As always, made in the US with dignified, union jobs paying living wages ✨

What many didn’t mention in their criticism is how the sweatshirt was crafted. The page listing the now-sold out product notes that it is a “Made in USA, Union printed, 100% cotton, Gender neutral fit.”

“100% of our products are proudly made in the USA and union printed,” the footer of each page on the website notes.

This is in contrast to many clothing products that are manufactured overseas, by workers in unfavorable or harmful conditions, where labor is generally cheaper compared to the United States.

President Donald Trump, for example, has his merchandise products made in China — despite dedicating his political agenda to “Put America First.” In fact, Chinese factories make more producing Trump-endorsed merchandise, such as his trademark “Make America Great Again” hats, than they do products within their own country. CNBC estimates Trump has made “$1.5 million in income over the past three years from an online retail store” that outsources production of merchandise beyond the United States, if their production location is even known.

Ocasio-Cortez, among others, made mention of that in their response to the outrage.

People are complaining about this tax the rich sweatshirt costing so much but not only is it made in the U.S by well paid employees, it is also a campaign contribution. I see the irony and it’s funny to laugh at but the full story also needs to be known pic.twitter.com/jKSmLVXUMo

Everyone: @AOC is selling a “tax the rich” sweatshirt for $58! That’s way too expensive.

Me, a former mass market apparel designer: Made in America. Union printed. Sounds about right. That’s what it costs to pay everyone a decent wage along the way. #TaxTheRich pic.twitter.com/afPZ6quQmZ

Republicans are freaking out bc we don’t use slave-wage labor for merch that funds grassroots organizing.

But what’s the difference between Trump’s merch and ours?

Proceeds from purchases of merchandise from Ocasio-Cortez’s website go toward funding her congressional campaign fund.

That’s why, prior to purchase, the website asks users to follow the rules for political contributions. Buyers must be a “U.S. citizen or lawfully admitted permanent resident,” purchasing with their own funds and not those belonging to someone else or a business, at least 18 years old, and not a federal contractor. The shop only ships within the United States and its territories.

“Republicans are freaking out [because] we don’t use slave-wage labor for merch that funds grassroots organizing,” Ocasio-Cortez tweeted, “But what’s the difference between Trump’s merch and ours? Ours is made in the US.”

She also added that the campaign gives shirts and other merchandise away for volunteers, so it doesn’t conflict with her views.

“Wait until they zoom in and see ‘gender-neutral fit,” Chasten Buttigieg replied in response. “RIP your mentions.”

Wait until they zoom in and see “Gender neutral fit” phew! RIP your mentions.

Manufacturers of actual gender-neutral clothing (as opposed to ‘unisex’) have generally been hard to obtain, as many manufacturers still craft their products based on the gender binary.

A tweet in reply also posted a “Keep America Great” hoodie from Donald Trump’s campaign shop priced at $55, which is a similar price to Ocasio-Cortez’s sweatshirt – while not assuring viewers to be a gender-neutral fit, or manufactured by union-organized staff, nor does it depict what material the hoodie is made from.

Other products that are now available on Ocasio-Cortez’s website are “AOC Plus Me”, “Drink Water & Don’t Be Racist”, and gender-neutral-fitting “Pride” tees. All have similar guarantees that they are produced in the U.S. and made by union workers.

Imagine if workers made enough money that could actually allow them to afford to buy products made in America that support other Americans?

Hello, it’s me. I can afford a $58 hoodie and I think we should tax the rich.