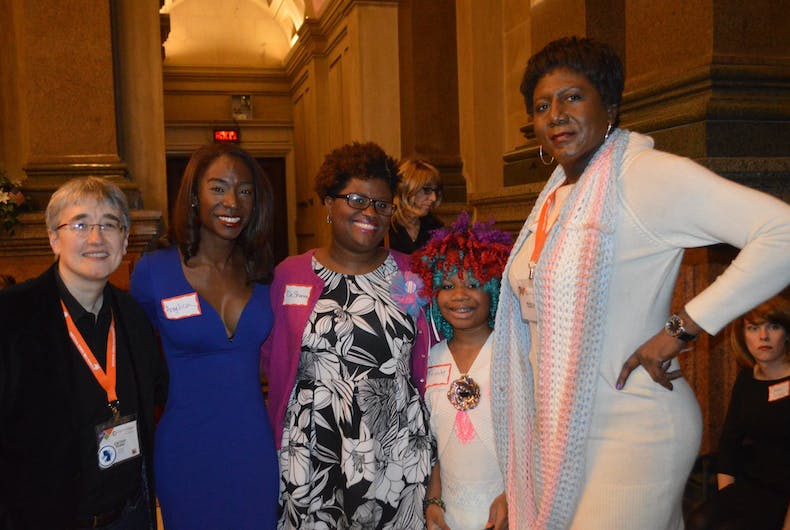 Trinity at the Trans United Fund fundraising reception in January 2017. She is second from the right.Photo: Facebook/Monica Roberts

The Delaware News-Journal recently ran a series of articles about a young girl and her transition.

In a follow-up editorial, though, the paper felt a need to pretend like this is an issue that people can and should respectfully disagree about.

The articles are about how Trinity Neal articulated her gender identity at a very young age, how her parents struggled to accept her, and how the family fought to get medical treatment covered by their insurance and to get the state and the Social Security Administration to recognize her gender.

The series is well worth reading. The family went from a panicked trip to Walmart to get girl’s clothes to meeting the Obamas because, as Trinity’s mother put it, “We represented something you didn’t see often, which was that a family of color accepted a trans child.”

Of course, the series generated responses from readers, and the News-Journal ran an editorial that featured one supportive comment (“What wonderful news! So happy for you, Trinity!”) and one hateful comment (“This is absolutely sickening.”)

Even though the supportive comment was a positive message that insulted no one while the hateful comment was, well, hateful, the News-Journal still scolded both sides for being so uncivil:

Some of the story comments above lacked a sense of a humanity, and that’s the most disappointing thing about how we communicate in the current cultural and political climate. We define “discourse” as hurling insults or making broad, inaccurate assumptions. No one group is guilty of this behavior. We all are.

It’s fine to disagree, and everyone has a right to voice their opinions.

Actually, one group is guilty of this behavior more than the other, and it needs to be pointed out.

Being hateful and not being hateful are not morally equivalent. The side of hate will always use more insults and “broad, inaccurate assumptions,” because that’s the definition of their side of this argument.

For a lot of complicated reasons, mainstream news outlets like to pretend that both sides of any political argument are just as right. This is silly when applied to scientific debates (evidence, not a desire for everyone to get along, is what determines who is right in science), annoying in policy debates, and just plain twisted when applied to debates about the civil rights of minorities.

There is no neutral position halfway between hatred of transgender people and a general belief that everyone should be treated equally, because the side of equality already is the neutral position.

In other words, “Are transgender people really human? Views differ” is not a morally neutral position.

Newspapers don’t have to be this way. They don’t have to pretend like an inherently uncivil point of view is worthy of being discussed civilly. They only have to do what they choose to do.