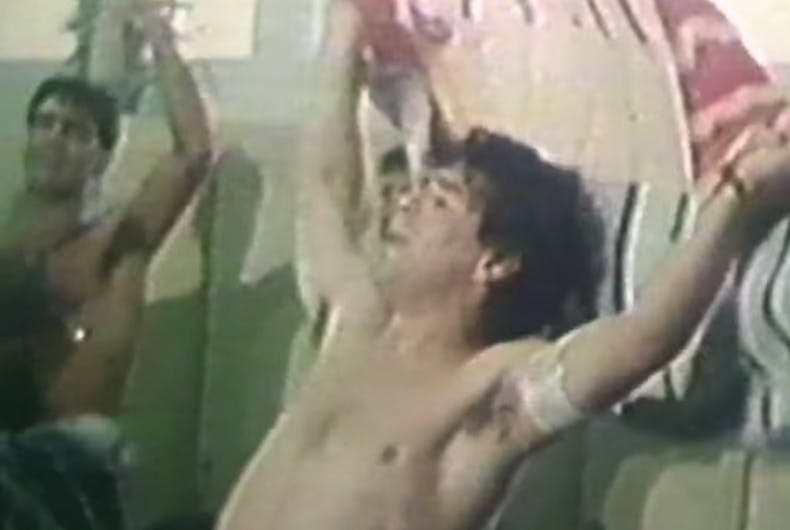 A shot of Argentine soccer legend Diego Maradona in the locker room was used in the ad.Photo: Screenshot/YouTube

A new ad from a sports channel in Argentina mocks Russia’s ban on gay “propaganda.”

TyC Sports put together a message to Russian President Vladimir Putin ahead of the World Cup 2018, which Russia is hosting and Argentina will be attending.

In the spot, images of male soccer players holding and touching each other are shown while a narrator talks about how Argentine men love showing affection to each other.

“Perhaps for tough men like you, it is hard to understand some love gestures…. There’s nothing more exciting than to see a bunch of men jumping naked in the locker room.”

“Mr. Putin, if love among men is a disease for you, then we are very sick. And you know what? It’s contagious,” the ad says, mocking homophobia in Russia.

Fundaction Huesped, an HIV organization in Argentina, said that the ad “banalized the grave situation of LGBT people in Russia” and “reproduced stereotypes.”

Twitter user Matzomara denounced the ad in a tweet that was liked over 1500 times. “Presenting a desexualized narrative of our acts of affection is the deepest act of cultural appropriation, of symbolic violence, of heterosexualization of a language that remains a part of our lives,” he wrote.

“And how does the ad end? By associating ‘love between men’ with ‘contagious,’” he wrote, asking followers to post comments about the ad on TyC Sports’s social media accounts.

This isn’t the first controversial ad TyC Sports has produced. In 2016, an ad for the Centennial Cup Americas, hosted by the U.S., used clips from rallies where Donald Trump made anti-immigrant statements while running images of Argentine fans coming to the U.S. to cheer on their national team.