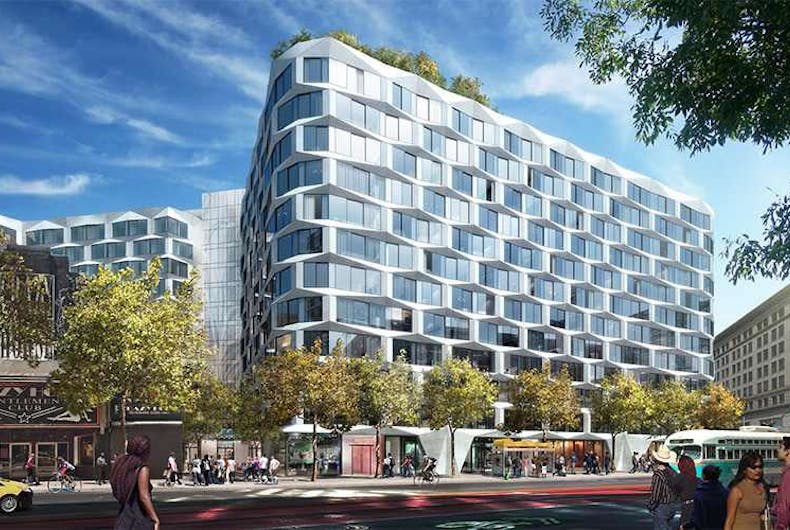 The proposed development for the site some say should be protected for its LGBTQ historical significance.Photo: Group i

Attempts by LGBTQ activists to preserve what they see as an historically significant site in San Francisco’s Tenderloin District failed last week as the San Francisco Planning Commission voted down an appeal in a 4-3 decision, saying the 12-story development proposed for 950-974 Market St. can continue.

Those fighting for historical recognition of the site now must bring their appeal to the full Board of Supervisors, with roughly one month to file the necessary paperwork to do so. The hearing has yet to be scheduled.

Development firm Group i is seeking to demolish four structures, including the home to former gay bars since shuttered, along Market Street between Fifth and Sixth streets. The proposed development would include 242 dwellings, a 232-room hotel, 16,000 square feet of retail space, as well as 82 parking spaces and 319 bike parking spaces.

The site was home to early gay bars The Old Crow, the Pirate’s Den, The Landmark Room, and The Silver Rail, as well as Compton’s Cafeteria, where transgender patrons stood up to police harassment three years before the historic Stonewall riots.

The bars are all closed now and the site of Compton’s is a halfway house.

There are also rumors of tunnels used to escape police raids existing below the structure, but developers claim they are a myth. A reporter from CBS traveled down to the basement to see if he could discover the alleged tunnels but found only a standard basement.

“What we’ve heard from other people who have accessed the space is that there were multiple venues including gay bars on the 950 Market block that had access to the underground space and could use it to go from store to store,” Nate Allbee, who has been working with groups asking for more time for evaluation of the site, told Curbed SF. “That’s why we’re asking for a LGBT historian to spend time assessing all of the buildings including the below ground space for what may have been boarded up or changed in the last 70 years.”

Basinger said they are not against the development and project in full, they want more time and effort to be dedicated to looking into the area’s historical significance.

“We are requesting a full EIR so that we can have the scholarship, have the thorough professional research to have clear answers about what would the loss of these resources mean to the Compton’s LGBT Historic District,” he said.

The hope is to have the area designated an official LGBTQ historic district and the appeal requested a full environmental impact review (EIR) for the project considering its historic relevance.

“The project sponsor has agreed to implement an improvement measure to develop an interpretative program to commemorate the former LGBTQ bars in the buildings on the project site and their association with LGBTQ history of the neighborhood and city,” said Planning Department staff member Melinda Hue.

“We’ll need a huge showing at the Board of Supervisors,” Basinger says of their efforts to continue the fight.

Video of the Planning Commission meeting can be found here, with comments about the possible LGBTQ historic significance of the proposed development site starting at the 2 hour, 30 minute mark. This photo appeared on the front page of The New York Daily News on Sunday, June 29, 1969. It’s apparently the only photo taken during…