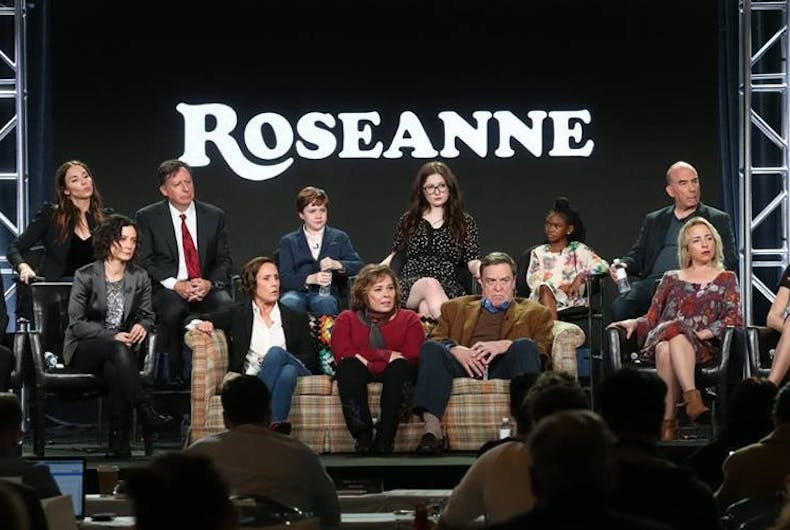 The Roseanne reboot is officially off the ground, after months of promos, hot takes, debates, and awkward interviews. It came back to huge ratings on Tuesday for ABC, netting an impressive 18.2 million viewers, and has enjoyed a number of positive write-ups from critics.

The Will & Grace reboot, which did well in its own right, only averaged 10.1 million, by comparison. In fact, the only show to have a bigger audience this season was the post-Super Bowl episode of NBC’s This Is Us, netting 26.9 million viewers, CNN reports.

Audiences were apparently not sufficiently turned off by Roseanne Barr’s tendency to go off the rails lately on more than one occasion, expressing her support for President Donald Trump, passing along conspiracy theories about the Clintons, and for some reason still insisting “he’s not homophobic at all” and that he “doesn’t oppose same-sex marriage.” Barr has also been incredibly transphobic on Twitter.

Putting aside for a moment the T part of the LGBTQ community, where it seems harder for Barr and her crowd to argue against the administration’s (and her own) obvious bias, it is clear that Trump is leading a team set to hollow out marriage equality until it is equality in name only.

Related: 45 times Trump attacked the LGBTQ community during his first year in office

He and his cohorts are pushing so-called “religious freedom” laws to give people a license to discriminate against LGBTQ people in essentially all facets of life. That includes the rights and privileges afforded by marriage, like hospital visitations, funeral arrangements, and, yes, public businesses who provide goods and services such as wedding cakes or wedding photography.

Whether progressives like it or not (and based on these numbers it seems some might be closet watchers of the show), it looks like Roseanne is here to stay.

Provided the high ratings aren’t just down to curiosity and nostalgia, there is a high likelihood that the show will be renewed.

Barr recently told The New York Times that the cast was all hoping the show would do well enough to warrant getting picked up for more seasons.

The Will & Grace revival has already been renewed for a third season, and its second season was extended by five episodes.

The character of Roseanne, like Barr herself, is a supporter of Trump, while her sister, Jackie, voted for Hillary Clinton and is firmly on the anti-Trump train. They haven’t spoken since the election, but end up reconciling.

It seems it’s just too hard to stay mad at Roseanne.

What will be interesting to watch now is if there will be any evolution in her character, especially if the show continues further into Trump’s term and into the next election. Or, perhaps, impeachment.