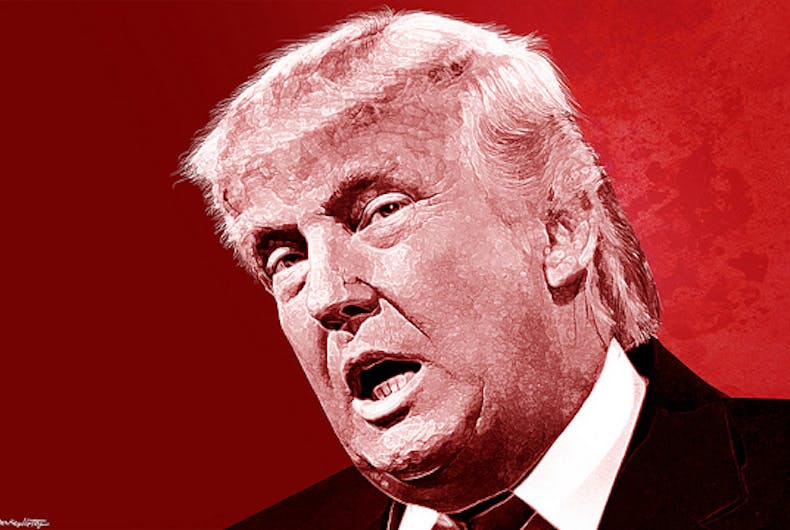 President Donald Trump is no friend to the LGBTQ community, despite all his empty election rhetoric.

This has been witnessed by his failure to make a pride month proclamation, his proposed cuts to HIV/AIDS funding, and his administration’s Department of Justice deciding to rescind transgender student protections, as well as arguing against civil rights for gay people.

Trump’s recent tweet stating that transgender people would not be allowed to serve in the military is the latest example of the White House’s attack on the most vulnerable among us.

While the ban is so far not actionable policy, as tweets are not official directives, it is yet more proof that Trump’s promise to protect the LGBTQ community was about getting elected, not about signaling policy objectives.

Trump seems to have upset just about everyone with his hasty anti-trans tweet, including his daughter, the Commandant of the United States Coast Guard, and numerous Republican elected officials.

Even those who requested Trump put a stop to the government funding transgender healthcare costs didn’t expect him to go this far, and never asked him to do so in the first place. The decision was so sudden that even the Pentagon was reportedly caught off guard.

Bandcamp has decided to join the chorus of those calling for a pushback to Trump’s anti-trans action, and they are putting their money where their mouth is, by donating 100 percent of their share of every sale this Friday to the Transgender Law Center.

The full statement from Bandcamp follows:

Bandcamp is a platform for artistic expression, and all manner of variance in experience and identity, including gender and sexuality, is welcome here. We support our LGBT+ users and staff, and we stand against any person or group that would see them further marginalized. This includes the current U.S. administration, and its recent capricious declaration that transgender troops will no longer be able to serve in the military. That this announcement was motivated in part to help fund the border wall exposes it as part of the administration’s cynical, discriminatory agenda.

In response, we will be donating 100% of our share of every sale on Friday, August 4th (from midnight to midnight Pacific Time) to the Transgender Law Center, a nonprofit organization that works tirelessly to change law, policy, and culture for the more equitable. TLC does critical policy advocacy and litigation on multiple fronts, fights for healthcare for trans veterans, defends incarcerated trans people from abuse in prisons and detention centers, supports trans immigrants, and helps trans youth tell their stories and build communities.

When an Executive Order was issued earlier this year barring immigrants and refugees from seven Middle Eastern countries from entering the United States, we held a wildly successful fundraiser for the ACLU. We hope you’ll join us in now doing the same in support of trans rights. To participate as a fan, simply purchase music through Bandcamp on Friday and we’ll donate our share of the sale to TLC. To participate as an artist or label, send some or all of your share of Friday’s sales directly to TLC here, and let us know your plan in the comments below so that we can help spread the word.

The company also offered suggestions for bands of interest, made by transgender and gender nonconforming artists:

Pandemix’s Poetic Punk Politics
Vocalist Shannon Thompson explains how she uses the genre’s tropes as a jumping-off point for her struggle to understand the world.

Tica Douglas’s Theology of Uncertainty
The Master of Divinity student talks about how theological studies informs their identity and their haunting new record.

How Oakland’s Experimental Scene Became Browner, Queerer, and More Femme
Conscious efforts to be more inclusive have opened up space in the Bay Area noise and experimental scene for artists like Kohinoorgasm, Spellling, and Beast Nest.

Popper Burns Preach to the Punk Rock Choir
The Austin queercore/no-wave group create a drag world “bigger than an idea” where their audience can feel empowered.

TRNSGNDR/VHS and the Art of Confrontation
The Baltimore artist uses harsh noise to question accepted norms.

Mykki Blanco Rips Up the Rule Book
Her new record finds her pivoting from wistful longing to fire-breathing on a dime.

Art-Pop Genius Oblivia on Martyrdom, Sainthood, and Stripping to Cat Power
Armed with a voice modulator and a drum machine, Local Honey, the trans femme performance artist behind Oblivia, says that her music aims to weaponize femininity to heal the wounds of patriarchy.

Tyler Holmes, San Cha, and Vainhein Imagine Experimental Queer Utopias
Three performance artists and musicians found inspiration to survive—and thrive—in their own ways, together, by channeling their rage to build something beautiful.

Hi Bias: Interview With Forced into Femininity
The latest tape by Forced Into Femininity (Chicago-based musician and performance artist Jill Flanagan), is only 10 minutes long, but its five songs pack a ton of power.

Big Ups: HIRS’ Queer Thrash Fury is Taking Over America
The Trans Girl Take Over tour takes the Philly collective to some unexpected places. Meet some of the bands they’re excited to share the stage with.

Album of the Day: ANOHNI, Paradise
On Paradise, ANOHNI imagines a utopia free of violence and masculine authority.

Album of the Day: Sweeping Exits, Glitter and Blood
The Portland glam-rock group switch up the power dynamics of horror.

Album of the Day: Aye Nako, Silver Haze
On Silver Haze, Aye Nako lulls listeners into comfort before turning the room upside down.