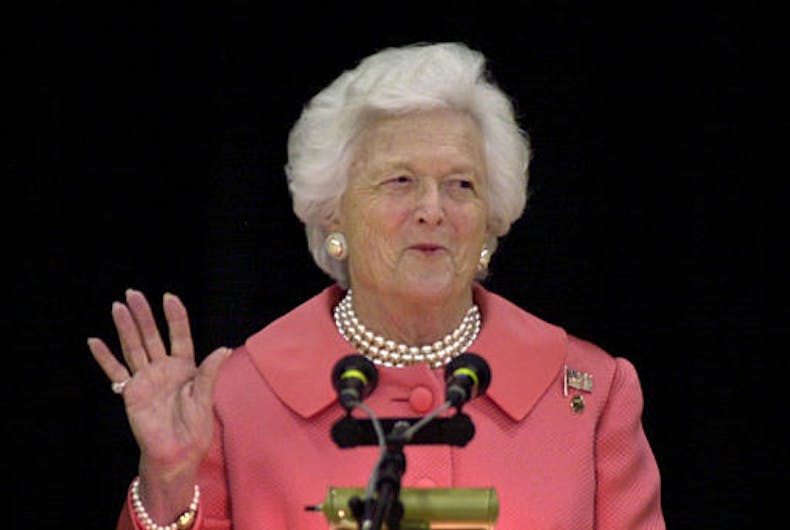 Barbara Bush’s nickname was The Enforcer, and it’s easy to see why. While husband George came across as easy going, Barbara was known for dressing down reporters and aides whose performance failed to impress her.

The American public got a glimpse of the steel behind the pearls when Barbara called Geraldine Ferraro, her husband’s opponent for vice president in 1984, “I can’t say it, but it rhymes with rich.”

But Barbara Bush’s death is a reminder that the Republican party once had a more socially liberal side. Even though her husband extended Ronald Reagan’s legacy of cultural conservatism, there were signs that Barbara was a sometime dissenter.

The most famous instance came in 1990, when then-PFLAG President Paulette Goodman sent First Lady Bush a request for a letter of support. Whether Goodman seriously expected a reply is unclear, but amazingly enough, Barbara Bush sent a personal response.

“I firmly believe that we cannot tolerate discrimination against any individuals or groups in our country,” Bush wrote. “Such treatment always brings with it pain and perpetuates intolerance.”

Somehow the statement found its way to the Associated Press, which published it. The right-wing predictably blew a gasket, as the statement confirmed its fears that President Bush was never a true believer.

Of course, there was reason to believe that beyond the PFLAG statement. The Bushes were supporters of Planned Parenthood before they made a sharp right turn to join the Reagan White House. And the Bushes were official witnesses at a same-sex wedding in 2013, at a time when the Republican party was fighting tooth and nail to prevent marriage equality from becoming the law of the land.

Of course, those gestures have to be balanced with the ongoing homophobic drift of the Republican party while Bush was at the helm. Bush’s attempt to ride the tiger ultimately resulted in his being a one-term president.

He was better about the AIDS crisis than Reagan was, although he and Barbara prefered to put the spotlight on babies and straight women. But as his wife’s passing reminds us, at one time Republicans could afford to say something nice about LGBT people. Unfortunately, that was nearly 30 years ago.