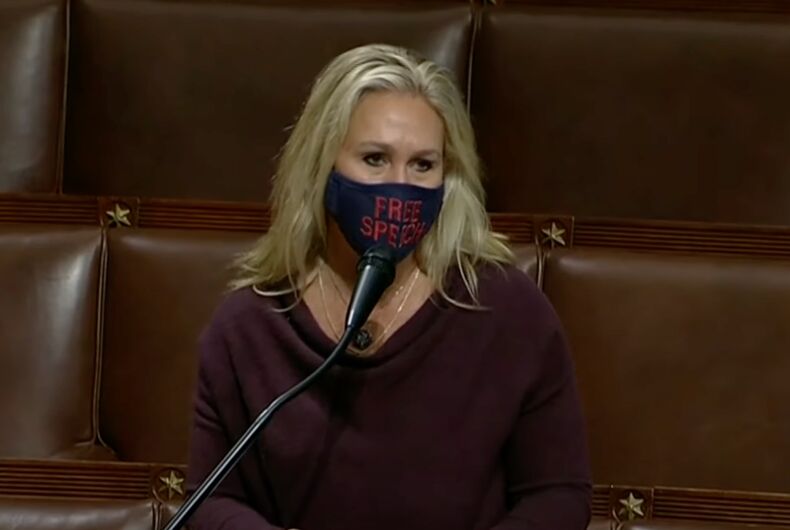 Rep. Marjorie Taylor Greene (R-GA) tries to justify her behavior before being stripped of her committee assignments.Photo: Screenshot

Rep. Marjorie Taylor Greene (R-GA), a believer in QAnon and other far-right conspiracy theories, has been stripped of her committee assignments in a bipartisan vote of the full House of Representatives.

But as legislators debated her fate, Greene used a unique defense for her outrageous behavior: Twitter allows pornography to be posted to their platform but refuses to allow her to be transphobic.

Related: Here are the senators who voted against America’s first gay Cabinet Secretary

Taylor Greene repeatedly claimed that the Sandy Hook Elementary School and Parkland High School shootings were fake and harassed one victim-turned-gun control advocate as he walked down the street. Despite this, she was assigned by Republican leadership to the Education Committee.

She has a history of inflammatory remarks online as well, including showing support for the claim that the fastest way to remove House Speaker Nancy Pelosi (D-CA) from her perch would be “a bullet to the head.” She has also claimed that space lasers operated by Jewish people started the California wildfires.

Shortly before the 230-199 vote, Greene gave a rambling statement that matched her history of linking unrelated items into a daring plot against her.

Twitter has a policy against hate speech that includes the LGBTQ community. They have also removed several accounts tied to spreading baseless conspiracy theories about the election – including QAnon believers.

Several of the insurrectionists who attacked the Capitol building last month are believers in the QAnon theory and the Department of Justice has said it is dangerous.