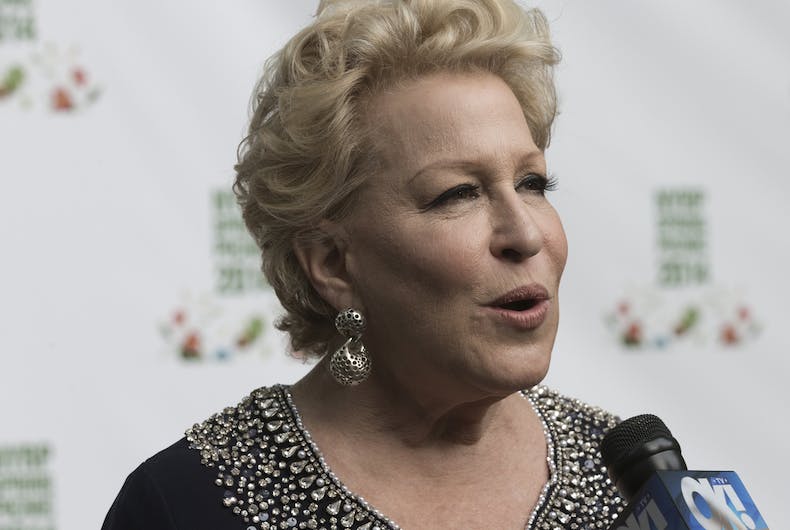 Bette Midler has apologized for a tweet that was racially insensitive. The iconic singer, impassioned by the Supreme Court nomination of accused sexual abuser Brett Kavanaugh, sent a now-deleted tweet decrying the plight of women worldwide that included a racial slur.

“Women, are the n-word of the world,” she sent. “Raped, beaten, enslaved, married off, worked like dumb animals; denied education and inheritance; enduring the pain and danger of childbirth and life IN SILENCE for THOUSANDS of years They are the most disrespected creatures on earth.”

The phrase comes from a 1972 song by John Lennon and Yoko Ono, but in the days of Black Lives Matter, #metoo, and the racial tensions stoked by the Trump administration, the comparison wasn’t as well received.

Midler tried to justify the tweet originally by citing the source, but deleted that response as well when users schooled her on why the phrase was offensive now.

“I gather I have offended many by my last tweet,” she tweeted. “‘Women are the…etc’ is a quote from Yoko Ono from 1972, which I never forgot. It rang true then, and it rings true today, whether you like it or not. This is not about race, this is about the status of women; THEIR HISTORY.”

But she posted an apology shortly after her brief attempt to defend her thoughts, but several users were still angry she attempted to justify the tweet at all. Sadly, many white people tried to excuse Midler’s tweet and had to get schooled by Black Twitter too.

So if anyone out there still has questions about when it’s appropriate or okay for a white person to say or use the n-word, here’s the answer. Never.

The too brief investigation of allegations against Kavanaugh infuriated me. Angrily I tweeted w/o thinking my choice of words would be enraging to black women who doubly suffer, both by being women and by being black. I am an ally and stand with you; always have. And I apologize.

I hope you sat down & pondered deep within yourself to find why you would utter such a statement and then not immediately see the issue with it. Black twitter should not have had to correct you on such an obviously offensive statement. We all have blind spots.

Let’s not pretend there wasn’t a serious doubling down before this apology.

Before the apology this Tweet basically said I don’t give a %#%^ if you’re offended.?? pic.twitter.com/YoOfJ37xow

Your words tonight have wounded me deeply and what makes the wounds worst is that I do not think you fully comprehend their magnitude. Moreover, your attempt at an apology is not sufficient. I hope this excerpt from a piece I wrote will help you learn how to apologize.

1. The problem with that logic is that not all women share exactly the same experiences. Comparing the word “woman” to the n-word is erasing the experiences of Black women and that’s not okay. Both of those words apply to me and they are not mutually exclusive. Among the many iconic images of Yoko Ono, there is one that is particularly haunting. Taken in late 1969, she and her husband John Lennon…