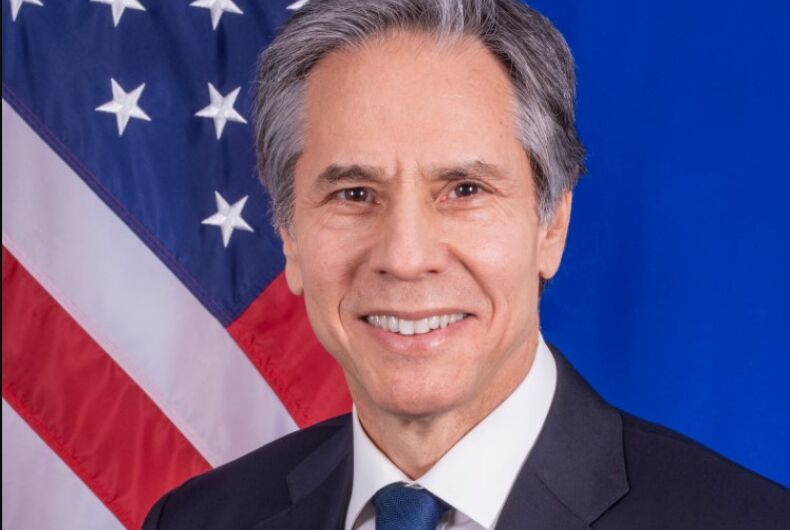 “All people are entitled to these rights, no matter where they’re born, what they believe, whom they love, or any other characteristic,” Blinken said.

Related: One of the biggest antigay activists says Trump’s human rights commission is their ‘opportunity’

During the Trump administration, former Secretary of State Mike Pompeo created the Commission on Unalienable Rights to re-work the international human rights framework because, he said, “Words like ‘rights’ can be used for good or evil.”

“How do we know or how do we determine whether that claim that this or that is a human right, is it true, and therefore, ought it to be honored?” Pompeo said.

The commission, subsequently, was stacked with anti-LGBTQ and Christian conservative activists. It even resulted in a lawsuit that accused the State Department of developing “an alternative definition of human rights” that excluded women and LGBTQ people, “likely in violation of the United States’ treaty obligations.”

The commission produced a report that mentioned “religion” or “religious freedom” 43 times, but didn’t mention LGBTQ people at all, outside of labeling marriage equality and anti-discrimination measures as “divisive social and political controversies.”

Blinken said that the report was “unbalanced” and that it didn’t reflect the priorities of the Biden administration.

“Human rights are also co-equal; there is no hierarchy that makes some rights more important than others,” he said. “Past unbalanced statements that suggest such a hierarchy, including those offered by a recently disbanded State Department advisory committee, do not represent a guiding document for this administration.”

“At my confirmation hearing, I promised that the Biden-Harris Administration would repudiate those unbalanced views. We do so decisively today.”

He also announced that he reversed the Trump administration policy that removed sections on women’s reproductive rights from human rights reports.

“The U.S. government cannot unilaterally redefine which human rights will be respected and which will be ignored,” said Tarah Demant of Amnesty International USA last year.

She said that the Trump administration’s “effort to cherry-pick rights in order to deny some their human rights is a dangerous political stunt that could spark a race to the bottom by human rights-abusing governments around the world.”

“The administration is seeking to create a hierarchy of rights, where it gets to decide which rights are ‘unalienable’ and which rights are what it calls in the report ‘divisive social and political controversies,’ a category which predictably includes sexual and reproductive rights and LGBTI rights.”

She said that the commission’s report “recognizes that legally there should be no hierarchy between different types of rights” but “still calls for U.S. foreign policy to de-emphasize economic and social rights compared with civil and political ones.”

Molly Bangs of Equity Forward said that the report was part of the Trump administration’s “consistent and continued erasure of LGBTQ people.”