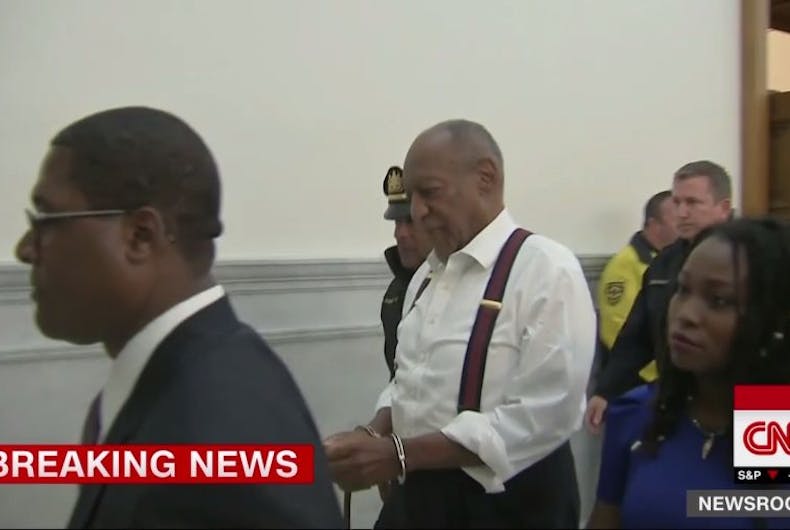 Bill Cosby is led out of court in handcuffs after being found guilty of rape.Photo: Screenshot

Comedian Bill Cosby has been sentenced to three to 10 years for raping Andrea Constand. Constand is a lesbian.

The 80-year-old sitcom star has been accused of sexually assaulting over 60 women. Many of their stories had similar elements, like that Cosby drugged them with Quaaludes.

While many of the accusations have been public knowledge for decades, only one of them was still within the statute of limitations by the time authorities decided to take them seriously: that of Andrea Constand.

Constand, a Canadian basketball player, said she met Cosby when she was coaching Temple University’s women’s basketball team. In 2004, she went to his house, and he gave her Quaaludes but told her that they were an herbal supplement. She remembers he started to touch her.

“I wanted it to stop. I couldn’t say anything,” she said. “I was trying to get my hands to move, my legs to move, and the message just wasn’t getting there. I was weak, I was limp and I couldn’t fight him off.”

Related: How a lesbian took down Bill Cosby when no one else could

Cosby’s attorneys asked the court for permission to out Constand, who is a lesbian. The lawyer said that it shows that Constand is “untrustworthy” because she never outed herself to Cosby, although the strategy may have been based on a hope that some of the jurors would be homophobic enough to acquit because the accuser is a lesbian.

“This has been a long journey to justice for all of the accusers, particularly for Andrea Constand and for her family. And we respect the fact that they have undergone and endured this journey to justice,” Gloria Allred told reporters after the verdict. Allred represented other women who alleged Cosby had drugged and raped them too; those cases were outside of the statute of limitations.

Cosby was denied bail and was escorted out of the courtroom in handcuffs.