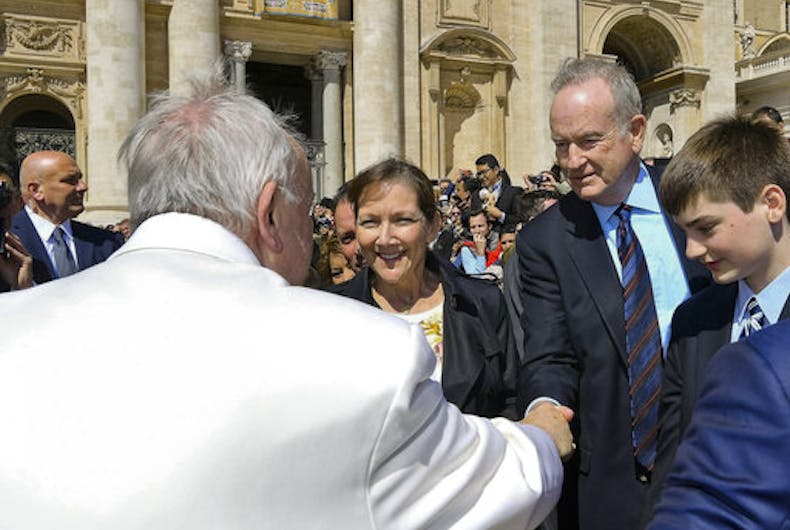 Pope Francis shakes hands with TV host Bill O’Reilly, second from right, during his weekly general audience, at the Vatican, Wednesday, April 19, 2017. O’Reilly is on a two-week vacation that on Wednesday took him to Francis’ general audience in St. Peter’s Square. Photo: (L’Osservatore Romano/Pool Photo via AP)

Despite the inglorious end to Bill O’Reilly’s two-decade Fox News Channel career, observers say his deep imprint on Fox and other cable news outlets and his influence on barbed political discourse are intact for the foreseeable future.

Fired on Wednesday amid a drumbeat of sexual harassment allegations, the vacationing host’s “The O’Reilly Factor” was quickly redubbed “The Factor” and Fox News announced his time slot will be filled by Tucker Carlson, another adamantly conservative Fox host who dovetails with the channel’s audience.

But it was O’Reilly who created the template for how to succeed in cable TV punditry, delighting his viewers with unapologetic attacks on liberal politicians and media members that he delivered with gusto.

“In many ways, he led Fox’s cable news revolution,” said Frank Sesno, a journalism professor at George Washington University and former CNN Washington bureau chief. “Cable news is someone standing on a mountain top shouting, and Bill O’Reilly was on the highest peak so he echoed across the landscape.”

And he keeps echoing in the broader media landscape. O’Reilly’s success at appealing to like-minded viewers made him and Fox into cable news leaders.

“That left CNN and MSNBC to figure out how to survive, and it shouldn’t come as a surprise that MSNBC figured out the only path to success was to segment and go for the liberal audience,” said Tom Hollihan, a professor at the Annenberg School for Communication and Journalism at the University of Southern California.

That multiplying effect gave O’Reilly a role in a seismic change, he said.

“He helped shape the kind of very polarized discourse that has come to define politics over the past few years in America,” Hollihan said.

His ratings made him Fox’s most lucrative personality, with his show generating $178 million in advertising revenue in 2015, according to Kantar Media. There was the prospect of even more, with his audience larger in the first three months of 2017 than it has ever been.

Then came an April 1 report in The New York Times that five women had been paid a total of $13 million to keep quiet about disturbing encounters with O’Reilly. While O’Reilly denied wrongdoing, dozens of his show’s advertisers fled within days even as O’Reilly’s viewership increased.

Following the Times story, Fox parent company 21st Century Fox said it had asked the same law firm that investigated Ailes to look into O’Reilly’s behavior. 21st Century Fox leaders Rupert Murdoch and his sons Lachlan and James said in a memo to Fox staff that their decision to ax O’Reilly came following an “extensive review” into the charges.

“I understand how difficult this has been for many of you,” Rupert Murdoch said in the memo.

O’Reilly lost his job on the same day he was photographed in Rome shaking the hand of Pope Francis. In a statement, he called it “tremendously disheartening that we part ways due to completely unfounded claims.”

Cancel reply
Bill O’Reilly may be out of a job, but his destructive legacy will remain