Fans of Showtime’s Wall Street drama Billions have been intrigued by the mysterious new character introduced this season, a genius intern named Taylor played with a strange combination of mental electricity and physical monotony by actor Asia Kate Dillon.

The character, as first described to them, was “female non-binary,” Dillon told Ellen DeGeneres this week as they visited her talk show. Dillon explained they prefer the pronouns “they, them, their,” and DeGeneres confessed she need to be educated on this, to show her guest the proper respect.

“It’s really confusing,” the host said, “and I think people assume that because I’m gay I understand all this and I don’t.”

“Totally! I mean I have identified as queer for a long time,” Dillon said. “When I read the breakdown for Taylor and it said, ‘female non-binary,’ I had to look up those words myself.”

DeGeneres asked them to explain what “non-binary” means, to help everyone understand. Here’s some of the discussion:

DILLON: “So non-binary is a term used by some people, myself included, “who experience their gender identity as falling somewhere outside the boxes of man or woman.”

ELLEN: “You were born a female?”

DILLON: “I was assigned female at birth.”

ELLEN: “You are a female but you don’t choose to identify that way.”

DILLON: “So, something I learned when doing research for the character of Taylor, that I play on Billions, is that Taylor is female and non-binary. And I thought, how can those two things coexist? So after doing some research I understood. ‘Oh! Sex and identity are different. Female is a sex, and sex is between our legs, and gender identity is between our ears. So that is how I am able to identify as non-binary but also female.” 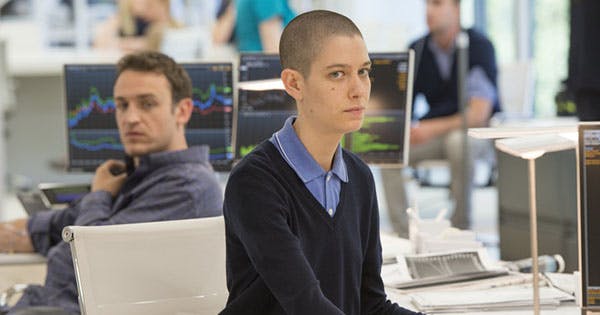 Asia Kate Dillon as Taylor Mason in BILLIONSPhoto: JoJo Whilden/SHOWTIME On television, they play Taylor Mason, a financial genius who is gender nonbinary, and like…