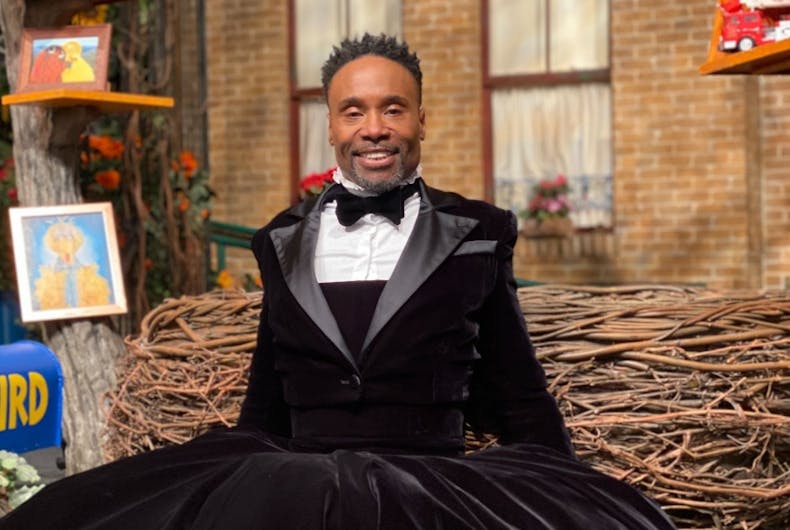 Sesame Street just announced that actor Billy Porter is going to appear on an episode and the right is already outraged.

Porter, who is known both for his portrayal of Pray Tell in the series Pose as well as for his extravagant red carpet outfits, was featured in some pictures that Sesame Street posted to social media.

The long-running kids show also posted a pic of him in his iconic tux dress in front of 123 Sesame Street on Facebook.

“If I had seen someone like you on TV when I was that age, coming out would have been so much easier and happier,” wrote one commenter on Facebook.

But there were also a lot of less than supportive comments. On Twitter, one person simply wrote: “Disgusting. Sicko degenerates peddling their sickness to innocent children.”

The far-right site LifeSite News also ran a story about the episode, quoting some of the more negative comments like “A man in a dress is not child appropriate, in fact, it can be confusing.”

The website accused Sesame Street of “promoting LGBT themes” and trying to “smash gender norms,” calling out a song from 2017 where Grover appeared in a dress. LifeSite News described Grover as a “male” puppet to explain why they, as adults, are upset about a puppet’s clothes.

But LGBTQ-supportive people are pushing back on social media.

“If you see this and you’re upset by it, maybe you should do what your parents couldn’t and help your children become emotionally healthy and confident adults,” wrote a commenter on Facebook.

“Dude, everyone getting all heated and they seem to forget that the founding fathers were running around in wigs and tights,” wrote another.

“Y’all are wild. Sesame Street has ALWAYS been about diversity and the American Experience,” wrote a different commenter.

The show has not said when the episode will air.