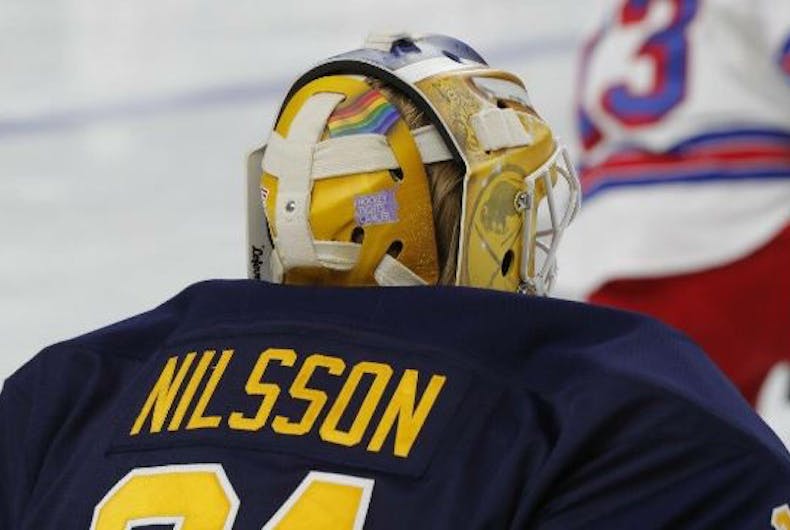 Anders Nilsson with a pride flag on his helmetPhoto: Twitter

Buffalo Sabres goalie Anders Nilsson is showing his ally status by wearing the rainbow pride flag on the back of his mask.

He tells The Buffalo Times that he wanted to show support for his gay friends and for the LGBTQ community as a whole.

“I have a couple friends who are gay, and life hasn’t been easy for them growing up,” Nilsson said. “It’s time that hockey starts to pay some attention to that.”

Nilsson, 26, decided to put the flag next to a picture of his son on his mask after taking part in an inclusion event in Edmonton, the paper reports. He was also a member of the Oilers when, in January, they became the first NHL team to use Pride Tape during their annual skills competition.

“We brought awareness last year in Edmonton,” Nilsson said. “We had a skills competition, Edmonton has one every year, and during that game we had rainbow tape. They said they were the first team in North America to do that.

“This summer, I thought why not be the first goalie to put that on the helmet and raise some awareness for that?”

The You Can Play, co-founded by Patrick Burke, the NHL’s director of player safety and the son of Calgary Flames President Brian Burke, has praised Nilsson.

“Anders Nilsson is courageous beyond the understanding of many,” said Wade Davis, director of You Can Play. “He is taking a risk on multiple fronts and is standing up for something that he believes in, knowing the backlash that could come his way. He’s my hero.”

“For the NHL, it means that they have created an environment where at least one of its players felt safe enough that he could express his views on an issue and that the league would support him,” he continued. “It also means that the education the league has provided to its players is raising awareness around an issue that impacts everyone, not just the LGBT community.

“For NHL fans, it means they will not be able to watch a Sabres game without being reminded that someone in a hyper-masculine sport cares about a marginalized group that many don’t associate with hockey.”