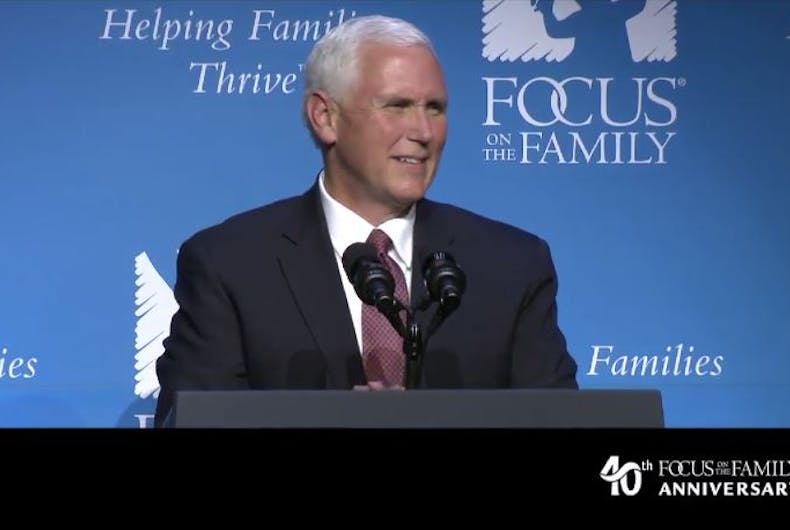 A longtime opponent of LGBTQ equality, Mike Pence has been the target of numerous protests. Here he is speaking at Focus on the Family in 2017.Photo: YouTube Screenshot

Mike Pence, who sees himself as the humble servant of the Lord and is seen as an self-serving pol by everyone else, is about to hit the campaign trail on behalf of his fellow Republicans. You don’t have to be the Lord to know that they need a lot of help. The question is how much help Pence will be.

The outlook for Republicans in the midterm elections fluctuates between dire and catastrophic. There are multiple signs that seats that should be safe for Republicans are up for grabs. In Texas, Sen. Ted Cruz is locked in a virtual dead heat with Democratic nominee Beto O’Rourke.  In Tennessee, Democratic Gov. Phil Bredesen has taken an early lead in the Senate race against nominee Marsha Blackburn.

And that’s just the Senate. The House is increasingly considered a lost cause, especially for Republicans in otherwise blue states like New Jersey.

Pence knows what he’s up against. “We have our work cut out for us,” he said last January. But with the president wrapped up in investigations (to say nothing of being wrapped up in himself), Pence is the logical choice to hit the hustings.

Pence has a couple of things going for him. He’s aggressively bland, unlike his boss, so he won’t upstage the candidates he’s campaigning for. Within the GOP, he’s much more of a unifying figure than Trump.

More to the point, Pence is a formidable fundraiser. Since becoming vice president, he has given candidates and political groups nearly $20 million that he has raised through his political action committee.

Of course, doing candidates favors pays off when you’re thinking about your own future. Pence is collecting an impressive pile of chits to call in when he decides he wants to sit in the Oval Office himself.

With an eye to that future, the Human Rights Campaign has decided to go after Pence now with an aggressive campaign that portrays Pence (accurately) as an extremist. “The Real Mike Pence” effort includes a 20-page report that details Pence’s history of homophobia, his circle of anti-LGBT advisors, and choice quotes underlying Pence’s beliefs.

The effort is unlikely to do much damage to Pence in the short-term. His supporters dismiss the effort as just a ploy for attention and cash. “I think the most likely thing here is that Pence is an easy target for the Human Rights Campaign to raise money from,” Republican strategist Rick Tyler told Politico. (Indeed, when you go to the Real Mike Pence page, you’re hit with a donation request before you see any content.)

But money is the name of the game in politics, and rolling over while Pence rakes it in is hardly a winning strategy. How much Pence becomes a campaign issue on his own remains to be seen. With Trump in the White House, there’s not much room for the spotlight on anyone else. That doesn’t mean there shouldn’t be.

Cancel reply
Can Mike Pence save the GOP’s bacon in the midterms?