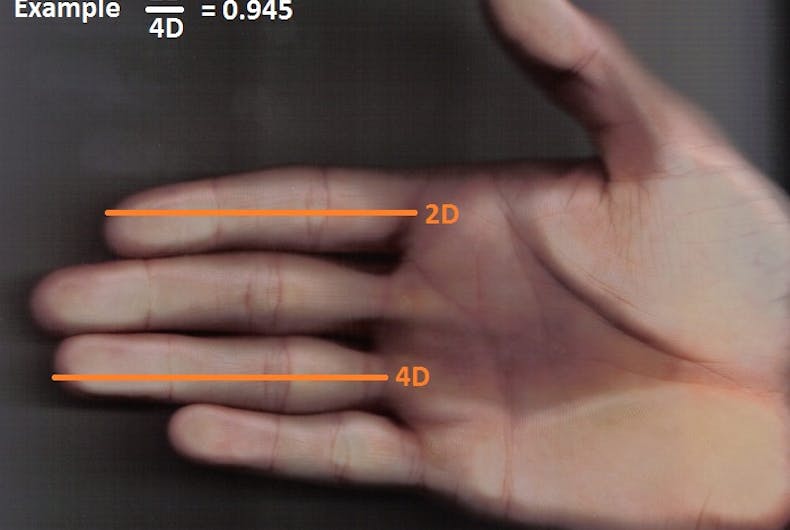 An image demonstrating how the “digit ratio” is calculated.Photo: Wikipedia

The study published in the Archives of Sexual Behavior, which measured the ratio of the length of the index finger to the length of the ring finger (digit ratio) in identical twin pairs where one twin is gay and the other is straight, is interesting, but it doesn’t support headlines like this one from Gay Star News:

Study confirms if your ring finger is longer, you’re more likely to be gay

So a study that compares sexual orientation and digit ratio would provide useful data in that context.

The University of Essex study found that lesbian women have smaller digit ratios than women in general (that is, their index fingers were shorter – or their ring fingers longer – than the average woman’s), which is more like men.

Gay men in the study also had smaller digit ratios (that is, their fingers were even more “male” than men in general), contrary to what the researchers predicted, but the difference between gay and straight men wasn’t statistically significant.

But that doesn’t mean that you can look at your fingers to see if you’re gay, for several reasons.

First, most people – male or female, gay or straight – have a longer ring finger than index finger. The question isn’t if the lengths are different, but how different they are.

The researchers weren’t looking at which finger stuck out more. They measured the fingers because length depends on where a finger starts and ends.

Second, the difference between the average man and average woman is really small, and individuals vary a lot regardless of gender.

The digit ratio is only meaningful when examining groups of people, not individuals.

Third, the University of Essex’s study only found a statistically significant difference between gay and straight women, and the 18 female identical twin sets that participated were probably all cisgender. That’s not to say that it isn’t important – so much of the LGBTQ science focuses on men – but cis men and trans people shouldn’t expect to see anything in their fingers, at least not because of this study.

This study provides another small piece of information about one of the many factors that has a influence on sexual orientation. Taken in conjunction with other research – research that looks at related questions, or the same question in other populations – scientists can use it to draw conclusions.

This is why being a good researchers requires more than just a ruler and a spreadsheet – understanding and analyzing the current research in any field takes years of study.

But this study isn’t a good reason to stare at your fingers.

Cancel reply
Can your finger length predict if you’re gay or straight?