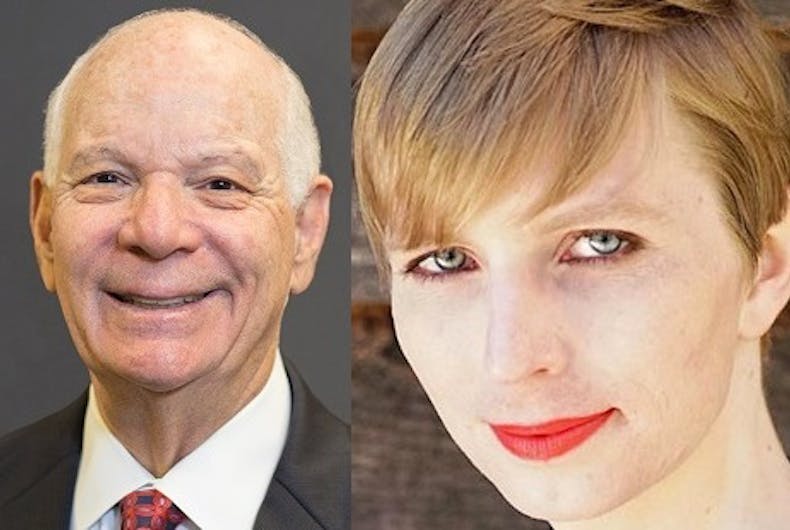 Chelsea Manning filed a statement of candidacy with the Federal Election Commission on Thursday, notifying them about her intent to run for the U.S. Senate in the state of Maryland.

She also released an announcement on YouTube, positioning herself as a political outsider.

This means that she will face Senator Ben Cardin in the Democratic primary later this year. Does she have a chance?

In 1987, he won the race to the U.S. House of Representatives, and in 2006 he ran for the U.S. Senate, beating Michael Steele, who would go on to become chair of the Republican National Convention.

He is now running for his third term in the Senate, after a career of winning elections and building local, state-level, and national support from the Democratic Party.

According to a Goucher Poll last year, 45% of people in Maryland approved of him, while 21% disapproved (34% said they don’t know). In 2012, he was challenged by state senator Anthony Muse in the Democratic primary, and he won 74-16.

Manning, on the other hand, is running in her first election in a state she moved to after her commutation last year. Social media and increasingly ideological voter bases have made the establishments of both parties weaker, but the experience and financial gaps are clear.

Can she differentiate herself on the issues?

Cardin is a solid liberal senator from a safe blue state. He has had a score of 100 on HRC’s Congressional Scorecard for years, he received a 100% rating from the NAACP’s Federal Legislative Report Card in 2016, and he has only voted against the ACLU’s position five times in his twelve years in the Senate.

In a Congressional Quarterly ranking of senators who support Barack Obama’s agenda in 2009, he ranked fifth. He didn’t always agree with Obama, though; in 2016 he joined a group of Senators who publicly called on Obama to resettle more Syrian refugees.

Manning is known for her views on LGBTQ equality, state violence, and civil liberties. Running on LGBTQ equality would not be a good strategy for Manning – why should LGBTQ people in Maryland give up a two-term Senator who serves on several power committees who basically agrees with them on everything?

Her status as one of America’s best-known whistle blowers, though, could help her stand out. In 2011, Cardin voted for legislation that made it easier for the government to prosecute people who release classified documents, the very act that landed Manning in jail.

The main difference is rhetorical

While a Senator Manning over the last several years would probably have voted the same way as Senator Cardin did, she would not have used the same words to describe her views.

The video announcing her candidacy showed images of police brutality, over which Manning said, “We need to stop asking them to give us our rights. They won’t support us. They won’t compromise…. We need to actually take the reins of power from them.”

Cardin introduced legislation in 2015 that would have given the Department of Justice more power to address police brutality. His described it as a politician would:

Our communities are safer when law enforcement and the people they protect can work together. Officer-involved shootings or the use of deadly force have led to numerous criminal investigations and trials, including those in Charleston, Cleveland and now Baltimore, with the upcoming trials for the Freddie Gray case.

Their Twitter feeds show a stark contrast in how they approach politics. Cardin’s feed is a series of tweets about specific policy measures that he supports. For example:

Our children should not be forced to make do with public schools without working heating systems. They deserve modern learning environments conducive to a high-quality education. #Baltimore https://t.co/rFQ0pSljXk

Manning’s, on the other hand, uses more powerful words to describe her vision but avoids discussing specific legislation. This tweet from last October is about as specific as she gets on her policy views:

So… could she win?

Donald Trump showed last year that, at least in the Republican Party, having a policy record, political experience, and specific, coherent plans for legislation can be beaten by forcefully speaking to the base’s dreams and resentments.

After all, most voters don’t know much about policy either.

Still, Cardin’s advantages in experience, fundraising, and support from traditionally Democratic constituencies presents a big challenge for any political newcomer. While it’s certainly possible that she could win, a victory for Manning would definitely be an upset.

Cancel reply
Chelsea Manning is running for Senate. Could she win?