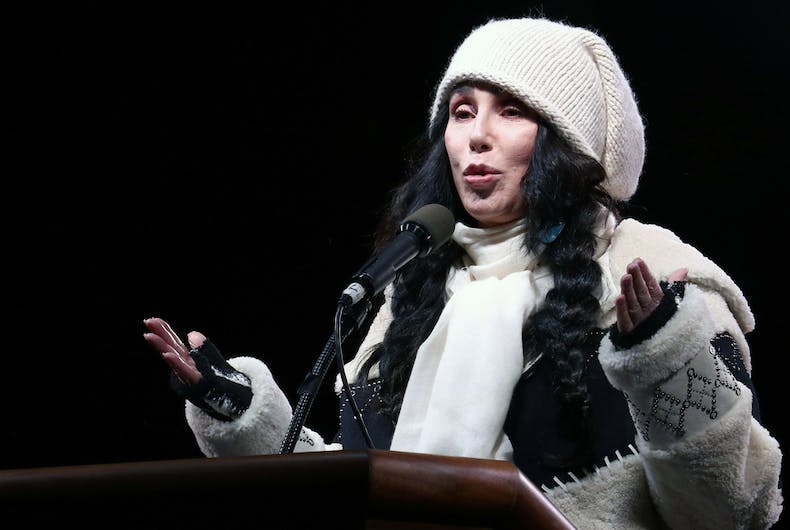 Cher speaks at the We Stand United Rally on on January 19, 2017, in New York City.Photo: JStone / Shutterstock

Pop Superstar Cher is making the rounds in the wake of her latest album, Dancing Queen, a compilation of ABBA covers. In one interview with PrideSource, the singer has spoken about her “pact” with her gay fans.

She feels that her gay audience started back in the 1970s when she starred in the Sonny & Cher Show with her ex-husband, Sonny Bono, but still doesn’t know how it started.

“I don’t know how that happens. I mean, how does it happen? I have no idea! It’s just like, we made a pact and we’re a group and that’s it,” said Cher.

“Yeah, there was a change, there was definitely a change,” she added. “And I think it was when I was not with Sonny anymore, and then somehow it all started to click. But I always had gay friends.

“I actually almost got arrested at a party with my best friend at school. He was gay but he couldn’t let anybody know, and he wanted me to go with him to a party and the party got raided. And we jumped out the bathroom window! It was high. We had to go over the bathtub into the window and jump out,” said Cher.

She was similarly unsure of a moment that really allowed her to stand up and be an ally to the LGBTQ community.

She spoke, too, of makeup artist Kevyn Aucoin, and his influence.

“Look, I have a friend Kevyn Aucoin – he’s dead now – but he told me when he was young, he was growing up in some place in Louisiana and said how horrible it was to have to hide and be frightened, and he said he loved listening to Cher records,” she said. “I think that’s a dead giveaway! Haha! If you want to hide being gay, do not buy Cher records!”

“And I had another friend who had a Cher poster on his wall,” she added. “I don’t remember where he came from – some small town too – and his dad ripped it off the wall and he bought another one, put it inside his closet and said it was a way to really be who he was in spite of who his dad wanted him to be.”

She also spoke lovingly about the loyalty of her gay following, sharing a moment when she felt very few were on her side.

“I remember when I was doing Come Back to the Five and Dime (A play Cher performed in during 1976) and we had standing room only before we got reviewed, and after we got reviewed nobody came except the community — the community, and little grey-haired old women who came to matinees. We managed to stay open until we could build back up the following.”

She added, about the community, “they just don’t leave you, they stay with you; that’s one thing that always keeps you going.”