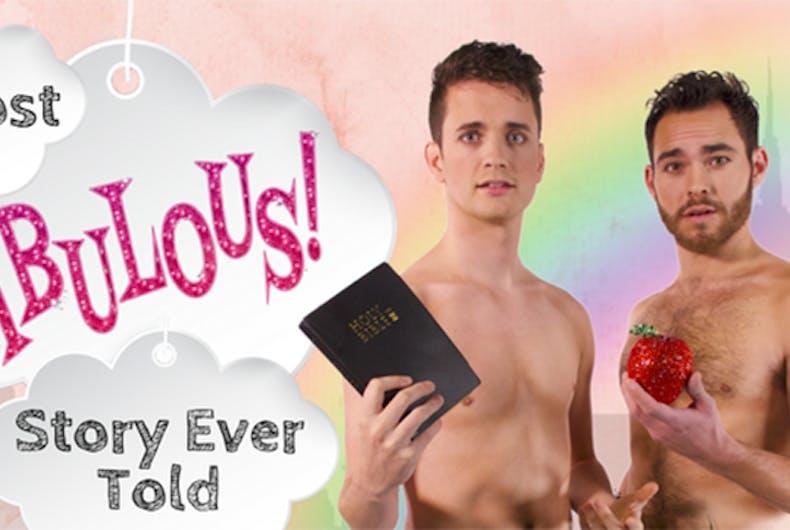 “The Most Fabulous Story Ever Told” is a retelling of the Biblical story of Adam and Eve.Photo: Out Front Theatre Company, Facebook

Atlanta’s Out Front Theatre Company has found itself on the receiving end of thousands of emails and phone calls condemning them putting on a play Christians are calling blasphemous.

The play, “The Most Fabulous Story Ever Told,” is a retelling of the Biblical creation story with Adam and Steve taking the place of Adam and Eve. Adam and Steve navigate their new surroundings with a lesbian couple by their side,  Jane and Mabel. It is set to open April 27 and runs through mid May.

Founder and Producing Artistic Director Paul Conroy has yet to respond to any of the messages, WABE reports.

“My heart really was heavy. There are messages coming from around the world to us,” he said.

“I think everyone has their individual beliefs and they are entitled to that,” he said. “If that’s what they believe, they don’t have to come and see our production, but to disrupt a production is where I don’t think it’s okay.”

Most are coming from a group called America Needs Fatima, that describes itself as “a campaign to capture the heart and soul of America with the Message of Our Lady of Fatima,” and states as its mission home visits with “a statue of Our Lady,” as well as “Public Square Rosary Rallies, publications, e-mail campaigns and protests against blasphemies.”

The group has received over 40,000 signatures on an online petition that reads:

I vehemently protest your showing the blasphemous play “The Most Fabulous Story Ever Told,” which, among other blasphemies, refers to the Virgin Mary as a lesbian. Please cancel your showing of it.

The Holy Mother of God is most pure and holy. To refer to her as a lesbian, or even to insinuate it, is an unspeakable blasphemy, which I reject with all my soul. I fear God’s wrath will fall upon us if reparation is not made.

If you continue with this presentation, we will urge Catholics to oppose it loudly, peacefully, and legally in as large a protest as we can help make possible.

Conroy is preparing for the possibilities of protesters showing up to the performances and reports that they are documenting all of the complaints.