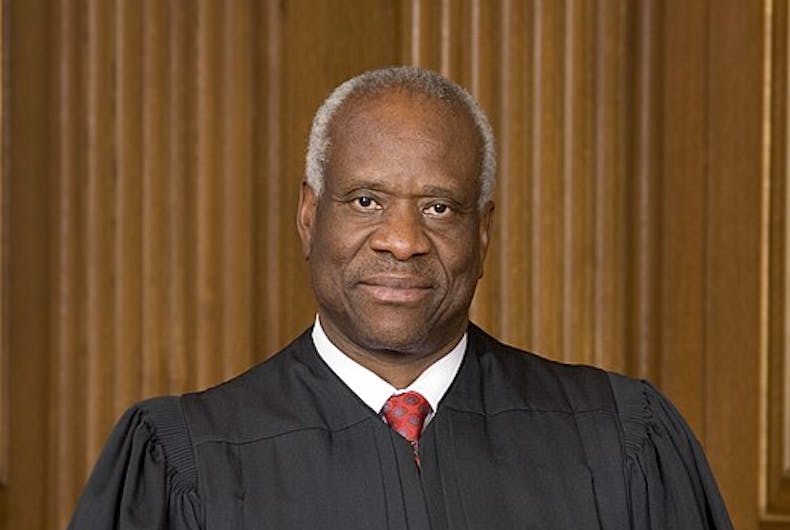 The Supreme Court decided to punt on the case of a baker who refused to make a wedding cake for a same-sex couple. That only delays the inevitable day of judgment.

But perhaps the biggest impact on marriage equality came in an entirely different case and Justice Clarence Thomas’ concurring opinion in it.

The case in question was about legal double jeopardy, in which you can’t be tried twice for the same crime. An Alabama man who had faced both federal and state gun charges stemming from the same traffic stop claimed that he was unfairly being charged twice. By a 7-2 vote, the Court upheld the current interpretation of the law, which allows the the federal government and state governments to pursue the same charges.

Thomas was in the majority, but he wrote a separate concurring opinion that went far beyond the issue at hand. Just because the law has always been interpreted that way, Thomas wrote, doesn’t mean that it should be. Thomas argued that respecting legal precedent, known by the term stare decisis, shouldn’t be sacred.

And what’s the case that Thomas suggested proved his point? Obergefell v. Hodges, the case that made marriage equality a national right.

“I write separately to address the proper role of the doctrine of stare decisis,” Thomas said in his opinion. “In my view, the Court’s typical formulation of the stare decisis standard does not comport with our judicial duty under Article III because it elevates demonstrably erroneous decisions—meaning decisions outside the realm of permissible interpretation—over the text of the Constitution and other duly enacted federal law.”

“It is always ‘tempting for judges to confuse our own preferences with the requirements of the law,’ Obergefell v. Hodges,” cited Thomas,  “and the Court’s stare decisis doctrine exacerbates that temptation by giving the venire of respectability to our continued application of demonstrably incorrect precedents.”

Thomas’ disdain for the Obergefell ruling comes as no surprise, as he has consistently been an opponent of any LGBTQ rights. What is important about his latest complaint is that he is setting the ground to revisit the ruling, if the opportunity arises.

Whether the Court has the stomach to rescind marriage equality is a big question. But it’s clear that there are enough conservative justices on the Court to carve out big exceptions for conservative Christians who don’t like the law. Thomas is laying the groundwork for that decision by telling his fellow justices that they don’t have to follow past Court decisions if they are “demonstrably incorrect.”

Thomas’ dissent also has the potential for other major issues besides marriage equality. In particular, Thomas has been comparing abortion to eugenics, a broad hint that he hopes to overturn Roe v. Wade.

It’s easy to dismiss Thomas as a crank who rarely speaks during Court arguments. But Thomas has been a huge influence on conservative legal thought. That he has marriage equality in his sights is something that should give any supporter of marriage equality pause.