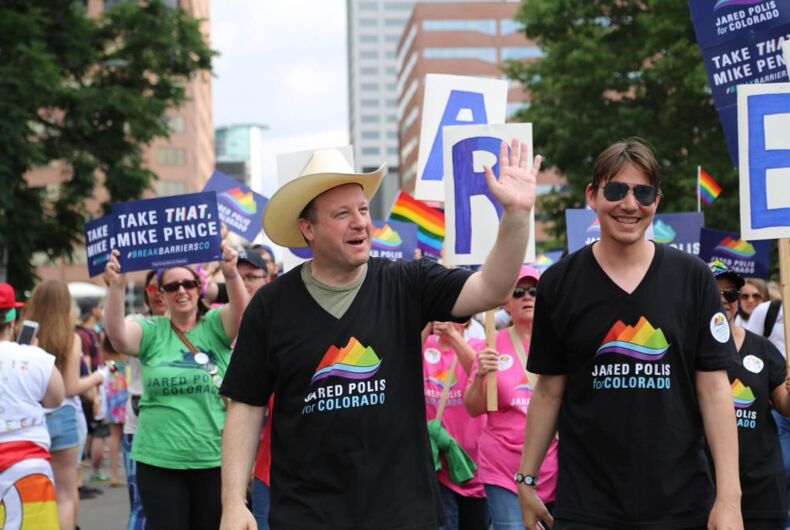 Colorado Gov. Jared Polis (D), the first out gay man to be elected governor, has proposed to his longtime partner Marlon Reis. But his choice of timing was a little unusual.

Polis got down on one knee shortly before Reis was taken to the hospital when his oxygen levels dropped too low.

Both Polis and Reis became infected with the coronavirus, but only Reis needed to be hospitalized. He was released a few days later.

“I was getting my things ready. My daughter was crying in the corner — she didn’t want me to go,” Reis told The Colorado Sun. “My son was asking me a lot of technical questions: ‘When are you coming back? Do they know exactly what’s wrong?’ It was a very tense moment.”

And that’s when a worried Polis dropped to one knee.

“It was the absolute perfect time,” Reis said. “I said to him, ‘I couldn’t breathe before. Now I really can’t breathe.’”

“It put such a spring in my step. When I got to the hospital I wasn’t scared anymore. I said, ‘I have a great relationship, a great family that I’m going to be coming home to after this.’”

Polis admits he was trying for months to find the right time to ask Reis to marry him.

Reis says that his brush with the coronavirus taught him to grab things while he can and enjoy them. Getting married is part of the plan.

“Let’s not wait. Let’s live life while we have it to live,” he said. “Let’s celebrate and look out for each other and keep caring about the things that we care about. Even though we’re dealing with these circumstances, we can’t give up on our dreams.”

Polis faced stiff pushback from Republicans in his state because of measures he took to slow the spread of the pandemic.

Colorado House Minority Leader Patrick Neville (R), for example, said in a talk radio interview in April that stay-at-home orders and other measures taken by local governments are, in general, part of a “Gestapo-like mentality.”

“As a Jewish American who lost family in the Holocaust, I’m offended by any comparison to Nazism,” Polis said at a later press event.

“I should have said authoritarian, not Gestapo,” Neville told the Denver Post in response to the governor’s reaction. “And I think authoritarian is still accurate.”

In another incident, Loveland, Colorado resident Michael Drewer painted “OPEN OUR GYMS FAGGOT” on his truck in response to the state closing businesses to limit the spread of the virus.