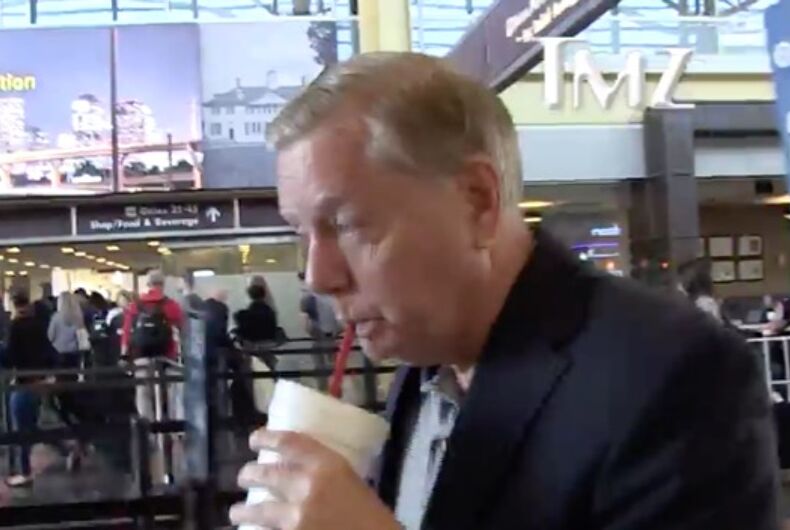 Republican Senator Lindsey Graham denying that he is gay to a reporter in Washington National Airport.Photo: TMZ screenshot

Rightwing media is currently enraged that a White House official made an opaque reference to persistent rumors that Sen. Lindsey Graham (R-SC) is in the closet and some conservative pundits are demanding that the media provide more coverage involving those rumors.

The controversy centers around comments made by White House Press Secretary Jen Psaki that reference a tweet from gay adult film actor Sean Harding about the 65-year-old childless bachelor.

Related: Rosie O’Donnell has been calling Senator Lindsey Graham out on Twitter as a ‘closeted idiot’

“Every sex worker I know has been hired by this man,” Harding tweeted last year, describing but not naming Graham. Replies to his tweet showed that many people understood he was talking about Graham, and several people said they allegedly knew sex workers who were hired by Graham. Other people claimed that Graham would insist on being called “Lady G,” a play on his initials.

The rumors were not substantiated, but they did get a mention from Psaki, who used the hashtag #LadyG in a tweet about Graham this past August.

Conservatives are now outraged about the tweet and are demanding the media cover it.

He didn’t seem to understand the context of the expression “Lady G” – the rumor isn’t that Graham insisted male sex workers call him “Lady G” because he’s a trans woman, but because he’s a gay man.

But because he’s a Republican, CNN and MSNBC won’t raise hell over this. Therefore, they’re okay with actual transphobia https://t.co/nWOw7Qzqs3

Major rightwing websites like Fox News, The Daily Mail, and The Daily Caller are also calling for the media to pay more attention to #LadyG.

Former U.S. Ambassador to Germany Richard Grenell said it should be “widely condemned.”

Kayleigh was asked about her old tweets about Trump so I’d think Biden’s press secretary lobbing a homophobic insult at Lindsey Graham this past summer would be fair game to ask about in today’s press briefing https://t.co/D78ryGg1YF

And on Twitter, conservatives accused Psaki of outing Graham and wanted her to be questioned about it… which would do very little to stop the outing.

The thing is, it’s pretty obvious why the mainstream media isn’t covering this: Graham, who never married and has no kids, has been the subject of unverified rumors that he’s gay for years, and the mainstream media probably doesn’t want to draw more attention to those rumors out of a general reticence to discuss the sexual orientation of anyone who isn’t out.

And Graham has denied the rumors. “To the extent that it matters, I’m not gay,” he said in 2018 when the media’s attention was again drawn to the gay rumors.

Graham himself hasn’t attacked Psaki, which may be because, unlike rightwing pundits, he realizes that getting conservatives across the country to beat the “Lady G” drum is not in his best interests as an elected Republican official from South Carolina, no matter how much or how little truth there is to the rumors.

And the controversy is lending itself to the Streisand effect, the phenomenon whereby attempts by a famous person to hide or censor information about themselves have the unintended consequence of getting more people to talk about that information. Headlines across the rightwing media landscape are effectively discussing the rumors that Graham is gay, while saying Psaki is wrong to have brought them up in the first place.

So while Grenell can safely call on the media to “widely condemn” Psaki because he isn’t in the closet, Graham himself probably doesn’t want the rumors to be “widely” discussed at all.

Instead, a spokesperson for Graham’s office issued a terse statement that attempted to shift the focus from him to Psaki: “Very disappointed someone in her position would embrace this style of politics. It says more about her than it does about Senator Graham.”

LGBTQ organizations have not yet called for Psaki to apologize.

Graham earned a zero on HRC’s latest Congressional Scorecard because of his staunch opposition to LGBTQ equality. He has consistently earned low scores from the LGBTQ organization. 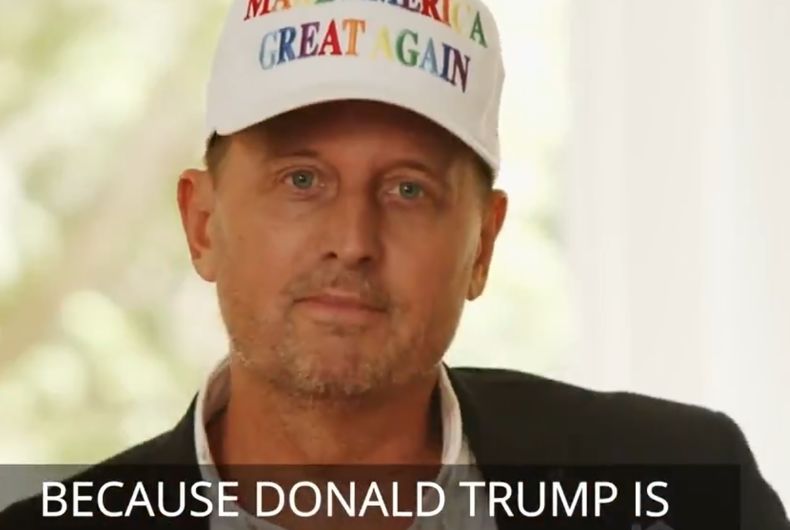