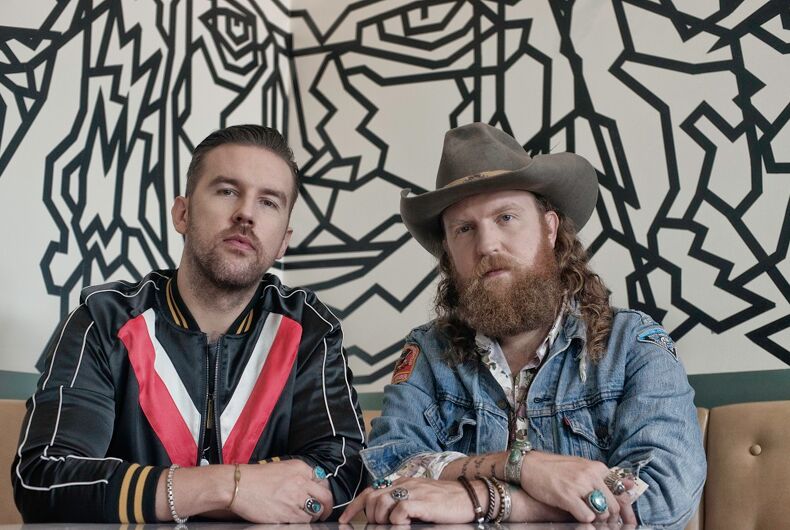 T.J. Osborne of the hit country duo Brothers Osborne has come out as gay.

“I’m very comfortable being gay,” the 36-year-old country star told Time. “I find myself being guarded for not wanting to talk about something that I personally don’t have a problem with. That feels so strange.”

Not to be confused with the 60’s bluegrass duo the Osborne Brothers, the Brothers Osborne has been nominated for seven Grammys and won four Country Music Association (CMA) awards in the past five years. With three studio albums under their belt, the group’s best-known single is “Stay a Little Longer.”

In the interview, Osborne said that he’s out to his family and the people around him in the music industry, but he hasn’t come out publicly to fans until now. The country music world can be very conservative and Christian, and, as the Chicks found out when they criticized then-President George W. Bush in 2003, very unforgiving of difference.

“I don’t think I’m going to get run off the stage in Chicago,” Osborne said. “But in a rural town playing a county fair? I’m curious how this will go.”

He said he’s worried that people will say that he’s just coming out to get attention, a common sentiment expressed by those who don’t like LGBTQ people in an attempt to keep them in the closet.

But he explained that he’s coming out to feel freer to live his life as his true self.

“People will ask, ‘Why does this even need to be talked about?’ and personally, I agree with that,” he said. “But for me to show up at an awards show with a man would be jaw-dropping to people. It wouldn’t be like, ‘Oh, cool!”

He talked about the impact the closet had on men he dated.

“Saying, ‘Hey, don’t hold my hand. Someone I know is in here, so can you wait in the car?’ Rightfully, they would feel unwanted by me.”

Osborne said that being in the closet was painful, especially when he was younger. He took those feelings, though, and turned them into country music.

“It was so lonely and isolating,” he said. “It made me resent people.”

And when a boy broke his heart in his early 20s, he couldn’t even talk about it with anyone.

“I was mad that no one knew why I was hurting.”

He started coming out to people close to him in his mid-20s, and he even incorporated a pro-equality message into the video for “Stay a Little Longer.” The video shows many different couples, including two men holding hands.

Fans reacted positively to the video at first, “and then there were people who were like, ‘Faggot lovers!’” Osborne recounted.

LGBTQ musicians aren’t exactly common in country music, but there are a few. Chely Wright came out in 2010 and it took a decade before she was invited back to the Grand Ole Opry. Alt-country singer Brandi Carlile has won multiple Grammys. And Lil Nas X was the first out gay Black person to win a CMA award in 2019.

Osborne said that he doesn’t care about success as much as he cares about being himself now.

“I’ve done more than I ever thought I would,” he said. “At this point, my happiness is more valuable than anything else I’d ever be able to achieve.”