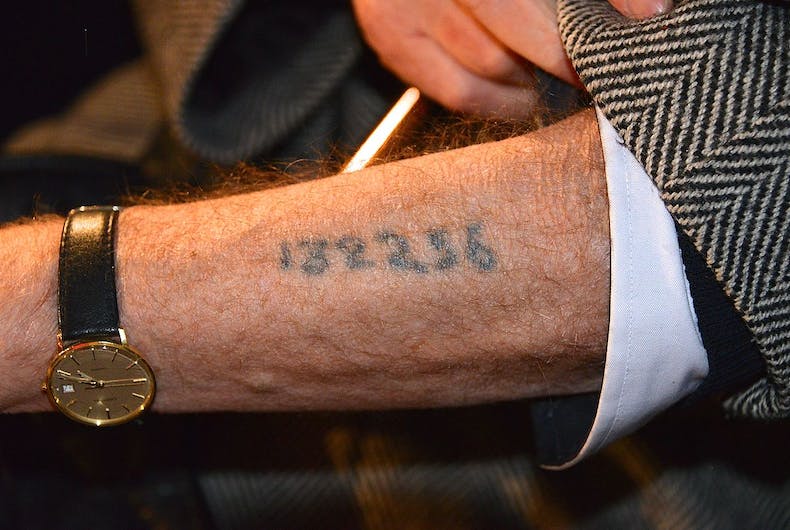 U.S. Customs officials have demanded that aid workers on the Mexican side of the border and the U.S. Border Patrol inscribe numbers with permanent markers on the forearms of parents and children trying to seek refugee status in America. They say it is for processing and identification purposes.

For persons who have already experienced and suffered unfathomable horrors, this further increases their trauma – while it shows an utter lack of historical perspective.

Not only is this akin to branding animals for slaughter, but analogous to the numbers tattooed onto the forearms of concentration camp inmates during the Nazi Holocaust.

Apologists argue that participants in competitive sporting events, such as marathons and triathlons, must wear numbers on their sportswear for identification purposes to aid judges and referees determine winners and awards.

Sports participants engage voluntarily in their activities. They most likely have the needed time to spend many days in training and practice for their events. To be a serious contender, they must have the resources to purchase quality equipment that not only increases their chances for success, but also protects their bodies from injury.

They are cheered on from the stands and sidelines by loved ones and total strangers as they strive to outdistance all others and improve their own personal bests.

Some participants will be handed awards, while others will gauge success by the distance they traveled. Following a period for their bodies to ramp down, and after a cleansing shower or bath, they will settle around a bountiful table for a nourishing meal with loved ones and discuss the day’s adventures.

By the time refugees arrive at the U.S. southern border – the relative fraction of people who survived the long and treacherous journey – they have already suffered unspeakable terror. They involuntarily fled their homes and the people and countries they loved where they shared common languages, customs, and histories with those around them.

Rather than competing in a sporting event for a trophy, their journey far from home was based on issues of staying alive: to escape the traumas of war, of violence, of starvation, and for the ability to protect themselves and their loved ones.

Not many people cheered them from the sidelines, except on rare occasions when good people along their route offered them shelter and nourishment to continue on their way. What propelled them, though, was the hope for a safer life and a chance to better their circumstances.

The United States has no intentions of granting many of the refugees permanent residency. Trump used them as pawns to frighten an already tense U.S. population in his quest to diminish the imminent Democratic wave in the 2018 midterm elections.

Once at the border, they were met by armed U.S. military personnel who had fortified fences with sharp razor wire and shot tear gas at them and their small children. Having permanent ink numbered inscriptions forced onto their arms adds further insult and dehumanization in their challenges to survive.

The comparison between identification numbers given to sporting contestants and those forced onto people seeking refugee status are false equivalents.

While the fate of branded animals in slaughterhouses and concentration camp prisoners in Nazi Germany will most likely not represent the ultimate treatment of refugees held in U.S. detention, if deported back to their home countries, many of these people will face extreme circumstances – including death.

None of them will get a participation trophy.

Editor’s note: This story was corrected to say military personnel shot tear gas at refugees approaching the border and not mustard gas.