Democrats in California should be preparing to coast their way to big victories in the fall. After all, state voters so heavily favor the party that the GOP now has third-party status (behind independents).

But Democrats being who they are, they aren’t about to let certain victory go untarnished by intramural warfare. So over the weekend, the party leadership voted to endorse state Senator Kevin de León over incumbent Dianne Feinstein for U.S. Senate.

Part of the reason is that Feinstein has overstayed her welcome.

Feinstein has been a fixture in state politics since the late 1960s. She was suddenly thrust into the San Francisco mayor’s office with the assassination of  Mayor George Moscone and her fellow City Supervisor Harvey Milk in 1978.

She’s been a Senator since 1992, and at age 85 is hell-bent on being re-elected again this year for another six-year term.

For ambitious younger (i.e., anyone below retirement age) Democrats, Feinstein is a giant roadblock to moving up the political ladder. Everyone anyone born after 1960 has seen Feinstein in office since before they were able to vote, including de León, who is 51.

The bigger issue, however, is ideological. Feinstein has always been relatively moderate, particularly for someone from a progressive enclave like San Francisco. As the Democratic party moves left, Feinstein increasingly looks out of touch – especially to younger voters.

By contrast, de León looks a lot like the future of the party. He’s Latino, in a state where Hispanics represent the largest single demographic group. Ideologically, he’s in the Bernie Sanders-mold, calling for Medicaid for All and vociferously attacking President Trump.

Feinstein was a major backer of Hillary Clinton and has been much more reserved in her criticism of Trump, saying that he could “learn and change” and become “a good president.” There’s no love lost between her and Sanders, who pointedly refused to endorse her re-election bid.

All of this would make for interesting conversation about the state of politics in California, except that it reflects the Democrats’ challenge as the party moves into 2020. The party is still suffering from the fallout from the bruising presidential primary battle between Sanders’ supporters and Clinton’s.

The vision for the party’s future direction is unclear. Sanders and fellow Senator Elizabeth Warren represent one point of view, which is to promote a progressive platform that includes universal health care, free college tuition, and much more rigorous regulation of banks and Wall Street.

The Clinton wing (which includes the Obama wing) doesn’t disagree with those goals, but advocates a more incremental approach as more likely succeed pragmatically. Former Vice President Joe Biden represents this wing and has been making noises about 2020.

The battle in California is just a preview of what 2020 may be like.

A compounding problem is that the combined current ages of Sanders, Warren and Biden is 220 years. The Democrats have a very thin (and superannuated) pipeline coming into the next presidential campaign.

Hard as it is to imagine, defeating Trump is not a slam dunk. He’s the incumbent, and he’s sitting on a giant pile of fundraising cash. Republicans love him.

Democrats make a mistake if they think of him as some political fluke of nature.

That’s why having the Democrats unified is so important. A 2020 replay of a Democratic party at war with itself may be the fondest hope of Trump and his best bet for re-election. 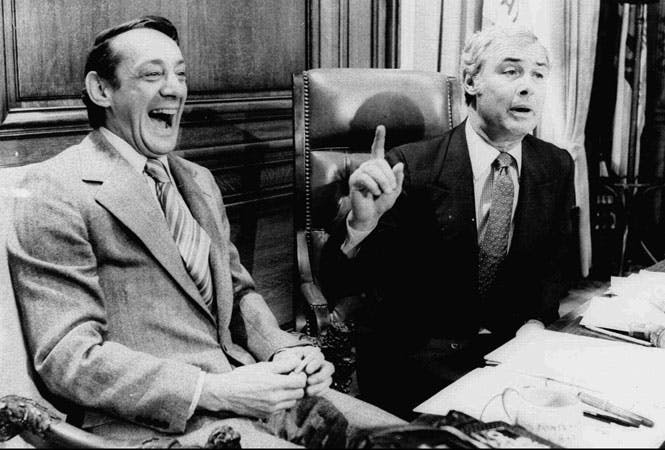