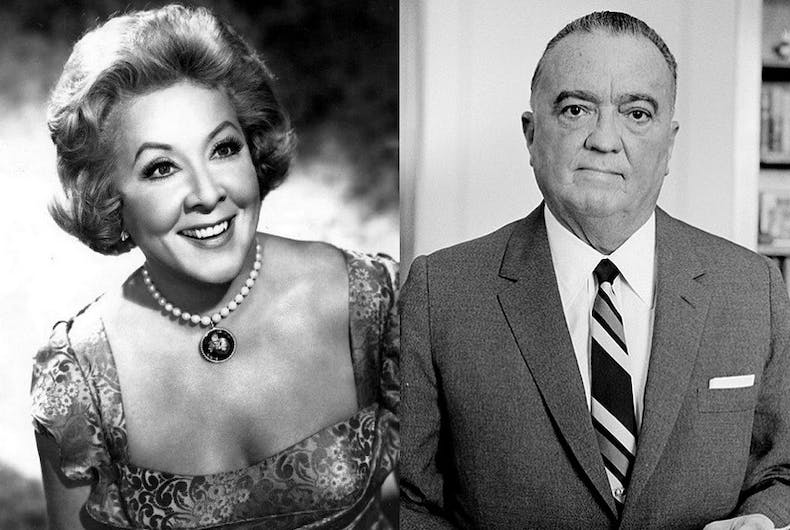 Vivian Vance in a publicity photo for “The Lucy Show” in 1963, and J. Edgar Hoover, 1961.Photo: CBS/United States Library of Congress

Talking on NPR, Gunn talked about his father, who worked for the FBI and was a speech writer for Hoover, the director of the FBI from 1924 to 1972.

Hoover was the subject of numerous rumors that he was gay and remained single his entire life. In 1993, a biography published a story that Hoover would go to parties in the 1950’s dressed as a woman, although that rumor has little proof behind it and has been disputed by other biographers.

At some point when Gunn was little, he and his sister were visiting their father’s office.

“Dad said Vivian Vance was visiting the director,” Gunn recalled, referring to the actress who played Ethel Mertz in the sitcom I Love Lucy.

“And I was a huge I Love Lucy fan. He said, ‘Would you like to meet her?’ Well, of course. So we met her. And it was thrilling and exhilarating.”

Years later, after his father had died, Gunn was talking about the story with his sister and mother and wondered if it was actually Vance in the office and not Hoover.

Gunn told his sister that it was “odd” that the director of the FBI wasn’t in his office when they visited.

“And she just stared at me. My mother asked, ‘What are you implying?’ I said, ‘I don’t know. You put a curly fright wig on J. Edgar Hoover and it’s Vivian Vance.’”

He wrote about the story in his book Gunn’s Golden Rules and said that Simon & Schuster investigated. He said that the publisher’s researchers talked to Vance’s biographers and neither of them had any record of her visiting the FBI or Hoover and that the FBI visitor logs have no record of Vance.

So is this proof that Hoover would crossdress at work, while he was actively participating in the Lavender Scare and surrounded by literal FBI agents?

Maybe Vance visited Hoover and her visit was something neither she nor Hoover wanted anyone to know about?

Or is Gunn mistaken about part of his story?

Either way, saying that Vance looked like J. Edgar Hoover with a wig is, at best, an exaggeration. In the images above, the picture of Vance was taken in 1963, and the picture of Hoover is from 1961, around the time that Gunn’s story would have taken place.

Do you think that Hoover would have passed for Vance if he put a wig on?

Cancel reply
Did Tim Gunn meet J. Edgar Hoover while the former FBI director was dressed as a woman?