Dolly Parton talked about her look and her relationship with LGBTQ people in an interview with Nightline.

She said that she once entered a drag look-alike contest, pretending to be a drag version of herself.

“They had a bunch of Chers and Dollys that year, so I just over-exaggerated – made my beauty mark bigger, the eyes bigger, the hair bigger, everything,” she said.

Even though she’s the real deal, she didn’t put in quite enough work into her look to compete with the queens.

“All these beautiful drag queens had worked for weeks and months getting their clothes,” she said. “So I just got in the line and I just walked across, and they just thought I was some little short gay guy, but I got the least applause.”

But she said that she would have been a drag queen if she were assigned male at birth.

“Is it true that you once said that it’s a good thing you were born a girl, otherwise you would have been a drag queen?” the reporter asked.

“Yes, it is true. Because I’m so over-exaggerated and I have so many fans in the gay community, and the drag queens.”

Parton said that she grew up in poverty in Sevierville, Tennessee, and modeled her look on a local sex worker.

“There was this woman, we won’t call her names, but she was beautiful,” Parton said.

“I had never seen anybody, you know, with the yellow hair all piled up and the red lipstick and the rouge and the high heeled shoes, and I thought, ‘This is what I want to look like.’”

But that hasn’t been without repercussions. She got threatened by the KKK for that, and she still gets threats.

“When it first started there were people giving us threats, I still get threats,” she said. “But like I said, I’m in business. I just don’t feel like I have to explain myself. I love everybody.” 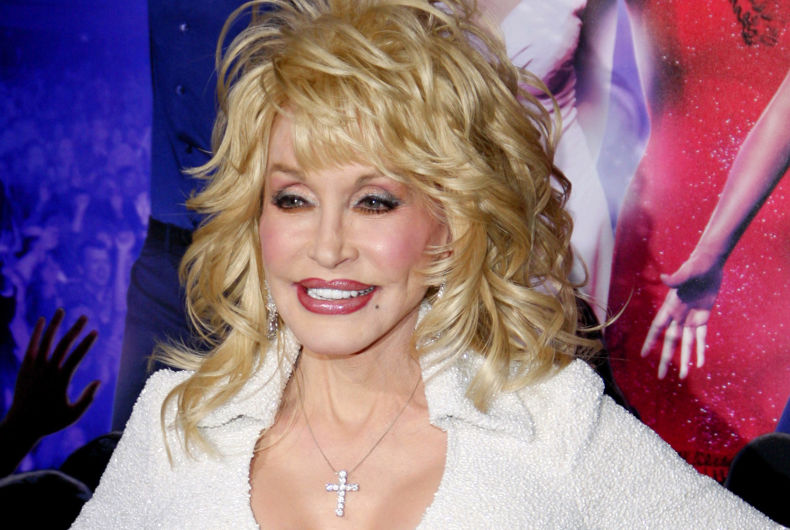 Cancel reply
Dolly Parton lost a drag lookalike contest. No one knew it was actually her.