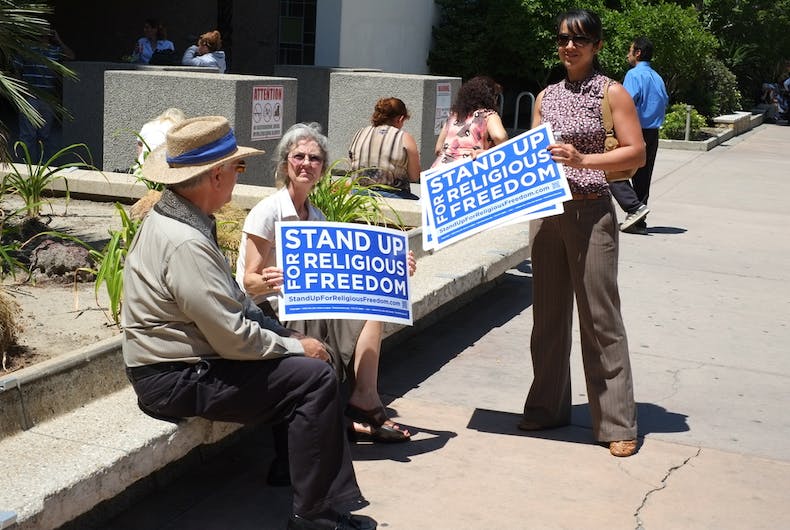 The modern religious right skyrocketed to political prominence in the late 1970’s, with orange juice queen Anita Bryant’s anti-gay “Save the Children” campaign. Forty years later, the juggernaut has ended in complete moral failure, to the point where their new slogan should be, “Save the Children for Roy Moore to Date.”

Of course, the religious right was always an experiment doomed to fail. It was born in cynicism, where gluttonous televangelists joined with opportunistic direct mail gurus to hunt for hot button issues that filled the coffers. That’s how they pioneered the twin cash cow issues of abortion and gay rights, with Rev. Jerry Falwell once saying, “If homosexuals didn’t exist, we’d have to invent them.”

While their movement was losing the moral high ground in slow motion, at least they were able to claim that these fallen heroes were the exception to the rule. That most of their members were salt of the earth patriots who stood for good and God.

Then Donald Trump came along, ripped off the Band-Aid of moral posturing, and allowed the Christian Right to show its true colors. Eighty-one percent of white evangelicals rationalized voting for a serial lying, pussy grabbing, thrice-married, narcissistic, habitually cursing, racist, sexual deviant. And to think their stock in trade, not long ago, was telling people to change their lifestyles.

Author Mel White once said that the religious right is sincere, but they are sincerely wrong. Now we come to find that they weren’t sincere at all – they were just contemptuous phonies, exploiting religion to justify hate or using faith to gain access to money or power.

If you doubt this, then explain how nearly half of Alabama voters cast a ballot for Roy Moore after multiple, credible allegations of attempted and actual child molestation. No amount of spin can explain away this sin.

This is not to say that all Christian conservatives are disingenuous or bad people. But, the true believers who practice what they preach are not a moral majority – they are a minority worthy of acknowledgment for their consistency and not giving into the enormous peer pressure to surrender their integrity to shill for Donald Trump.

There’s a sentence in Michael Wolff’s book Fire and Fury that hasn’t gotten the attention it deserves. It comes toward the end, when Steve Bannon is praising Trump’s lawyer Marc Kasowitz: ‘Kasowitz on the campaign — what did we have, a hundred women? Kasowitz took care of all of them’.”

To paraphrase the old Act-Up slogan, the silence of the religious right does equal their death. Yes, they are in positions of power. They may yet get their goal of theocracy — but as a movement they have become the insincere, power lusting, hypocritical, cartoonish parody we always said they were. They have erased their ethical standing and washed away their moral authority, like a baptism in reverse.

Even if Mike Pence becomes president, we all witnessed the moral sewer he giddily crawled through to claim the throne and place an empty crown devoid of any spiritual meaning or higher purpose on his compromised head.

Today, the religious right mostly exists to serve as Trump apologists, justifying his immoral behavior or explaining to the flock why they should look the other way on his sexual exploits in the service of rich televangelists securing huge tax cuts. These flag-waving patriots even malign serious investigations into Russia’s meddling into our democracy to protect Trump.

The religious right exists in theory, but in practice, it is just another special interest or political party “of this world” — invoking tired tropes and imagined enemies, such as the War on Christmas, to cover up the unmistakable fact that they, themselves, have been waging war on Christ, or at least the puritanical version of Christ that they disingenuously trotted out in the 1980’s and 1990s.

They weren’t who they claimed to be. It was all a big, giant lie. RIP Religious Right — you said we were all made in God’s image, then Trump became your God, and you remade yourself in his profane image. It was a movement that was the original fake news. So, it’s poetic justice that this monstrosity withers and dies in such an ignominious and tawdry manner.

The effort to merge church and state has been a catastrophe – costing the religious right its decency and dignity. The trust they surrendered and the pretense of virtue that they squandered is unlikely to be restored for decades, if ever. In trying to use the ballot box to save souls, they became a soulless shell of what they once imagined themselves to be.

Politics never belonged in the pulpit – and they are turning this country into an armpit by serving as the chief enablers (aka The Base) of reprobates like Donald Trump and Roy Moore. It’s time for the religious right to end their failed forty-year experiment in politics before they inflict more damage on a nation that they played a key role in dividing. 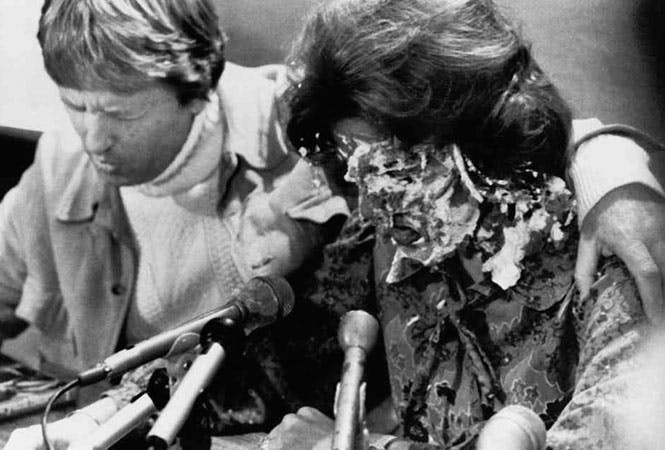 Anita Bryant, country singer and gay-rights opponent, had a banana cream pie thrown in her face by Tom Higgins, an openly gay man from Minneapolis,…