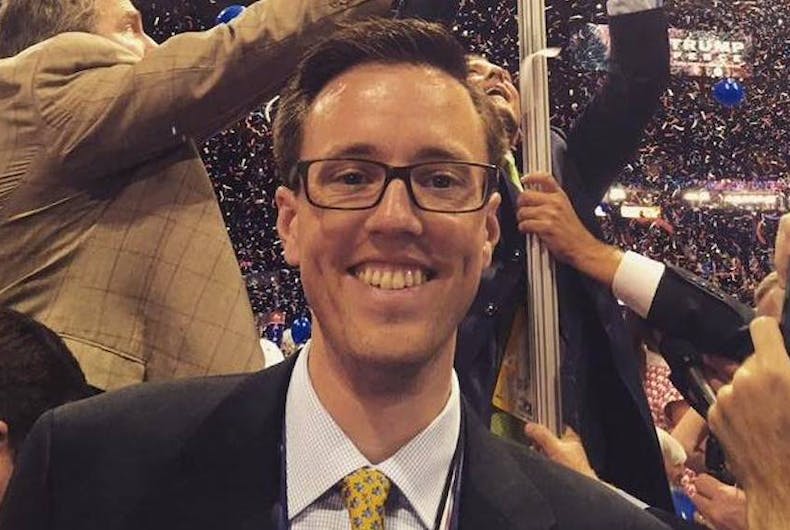 Judd Deere is a gay Republican who has served as Trump’s deputy press secretary since January. He often speaks for Trump on domestic issues and, in a recent interview with Buzzfeed News defended Trump’s many anti-LGBTQ policies.

Along with his “high-profile responsibilities,” Deere is tasked with “briefing reporters this month on Trump’s call about ICE raids with House Speaker Nancy Pelosi, NATO, a summit on social media, affordable housing, the congressional picnic, Trump’s golf schedule, and more,” according to Buzzfeed News reporter Dominic Holden.

Most recently, Deere helped craft Trump’s cynical tweet recognizing June as Pride month, a tweet which touted Trump’s stance against certain anti-LGBTQ countries while ignoring his own over 92 attacks our community’s rights.

When pressed on Trump’s various anti-LGBTQ policies, Deere pulls out tired GOP talking points for each one: The trans military ban is meant to preserve troop readiness and was suggested by top military experts (a lie); Trump allows medical workers to deny LGBTQ people care just to protect their “conscience rights”; and if a Christian baker refuses to sell him a wedding cake, “I’ll just go find another cake shop that will.”

Deere says Trump opposes the Equality Act, which would provide nationwide LGBTQ protections, because it will threaten the “religious freedoms” of Christians. Deere said:

He’s been very clear that he’s going to protect the conscience rights of all Americans. The left tends to preach complete and total equality except for when you don’t agree 100% with them on every issue. If the Democrats really want to work with us on passing the Equality Act, then they should actually work with the president.

Deere used to serve as a spokesperson in the Arkansas attorney general’s office back when it defended its policy of blocking same-sex parents from putting their names on their children’s birth certificates. Deere doesn’t know if Trump actually realizes he’s gay, but he says no one in the White House treats him any differently for it.