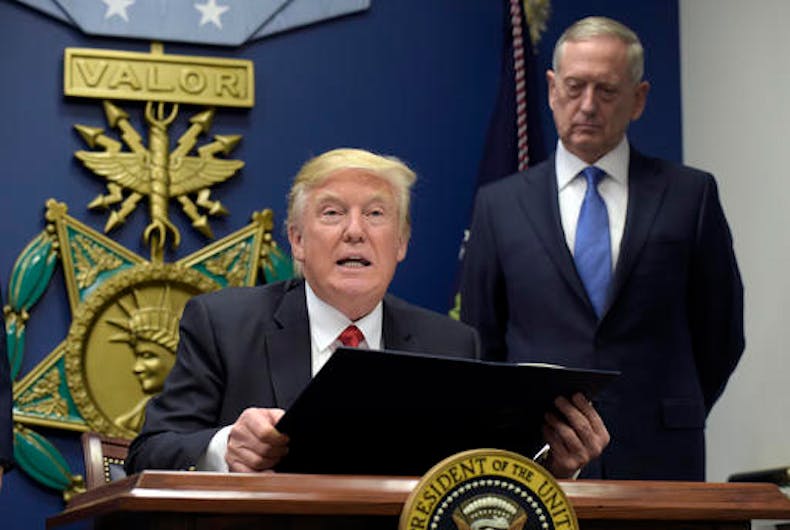 President Donald Trump, left, with Defense Secretary James Mattis, right, watching, explains the executive action on extreme vetting that he is about to sign at the Pentagon in Washington, Friday, Jan. 27, 2017. Photo: AP Photo/Susan Walsh

Within days after delivering the invective he called his “inaugural speech,” which was quite literally and figuratively the bleakest, angriest, ugliest, most apocalyptic of all the many inaugural speeches I have heard since I first listened to John Fitzgerald Kennedy in January 1961, the Grim Tweeter followed up with a series of (anti) social media messages and executive orders playing to the very basest of his political base.

In less than one week after taking over his whitest White House, he sat in all his arrogance at the noble historic desk in the Oval Office with obvious hyperbolic flare unmagisterially scribbling his signature on several executive orders and memoranda meant to punish, further marginalize, and strong-arm others into submission, while simultaneously rewarding the already rich and powerful.

Over his Twitter feed and through White House Press Secretary Sean Spicer, Trump complained yet again about the “rigged” election in which he claimed, without any documentation, 3 million-5 million people voted illegally thereby giving Hillary Clinton an unfair advantage in the popular vote.

He lambasted the media for unfairly and inaccurately estimating the number of people who attended his inauguration, while Spicer used his first so-called press briefing to promote his “alternative facts.”

“This was the largest audience to ever witness an inauguration – period – both in person and around the globe,” he claimed.

Trump stood in front of the solemn memorial wall in honor of the fallen at CIA headquarters, and gave a rambling anything-but-solemn, highly offensive, non-prepared speech where he again relitigated the election and signaled his approval for the reinstatement of torture techniques, even though they have been declared illegal and go against the guidelines in the Army Field Manual and the Geneva Convention.

Utterances from his mouth at the CIA further placed at risk our soldiers who have joined Iraqi forces to oust ISIS fighters from the country when he reiterated his belief that the U.S. should have taken Iraq’s oil reserves:

“The old expression, ‘To the victor belong the spoils.’ You remember, you always say keep the oil…. But, okay, maybe we’ll have another chance [to take the oil].”

Shooting out in rapid-fire succession in his seminal fashion, the Short-Attention-Spanner in Chief grabbed at executive orders and memoranda giving states permission to limit provisions of the Affordable Care Act in advance of Congress gutting the entire program, check; restricting visas for Iraqis hoping to enter the United States, check; banning refugees from Syria, check; constructing a southern border wall, check, and a detention center to house violators, check; rescinding restrictions and giving the go-ahead on the completion of the Dakota Access and Keystone XL pipelines, check; nixing the Trans-Pacific Partnership agreement, check; limiting or ending foreign aid to international organizations and agencies that promote family planning and discuss abortion, check.

In addition, he threatened to withhold federal funding (except specifically related to crime prevention) from any city or municipality serving as sanctuaries for “illegals.” And meeting with corporate executives during his first week, he promised to reduce or end governmental regulations on the corporate and banking sectors and to lower corporate tax rates. He also threatened to pull out of the North American Free Trade Agreement and the Paris Agreement on Climate Change, and to consider taking the highly controversial step of moving the U.S. embassy in Israel from Tel Aviv to Jerusalem.

In a quick snap of a finger (slap to the face), Donny Downer altered the presidency from one of grace and dignity under his immediate predecessor to one of bluster and rage, from one of formidable intelligence and supreme self-knowledge to another emphasizing a narcissistic arrogance and a lack of self-understanding that pose great peril not only to our nation, but to the entire world.

Trump’s first week has paved the way for a “governing” style concerned more with short-term expediency over long-term strategies, unilateral decision making over negotiated settlements, bravado and bluster emphasizing power over others rather than reasoned and measured actions emphasizing shared power with potential negotiating partners.

Most assuredly, Donald is having difficulty sleeping at night and coming to terms with the verifiable fact that his inaugural attendance numbers pale in comparison to the millions more who marched worldwide for women’s rights and equality one day later, and the ever-growing group of mayors and governors who refuse to buckle to his bullying.

His election served as the catalyst sparking a movement for social change bringing people together from disparate social identities, and with unifying social, economic, and political philosophies in promoting progressive social change.

People from all over the planet are joining in coalition and solidarity with the understanding that we are all diminished when anyone of us is demeaned, and that in the illustrious words of Dr. Rev. Martin Luther King, Jr., “No one is free until we are all free.”