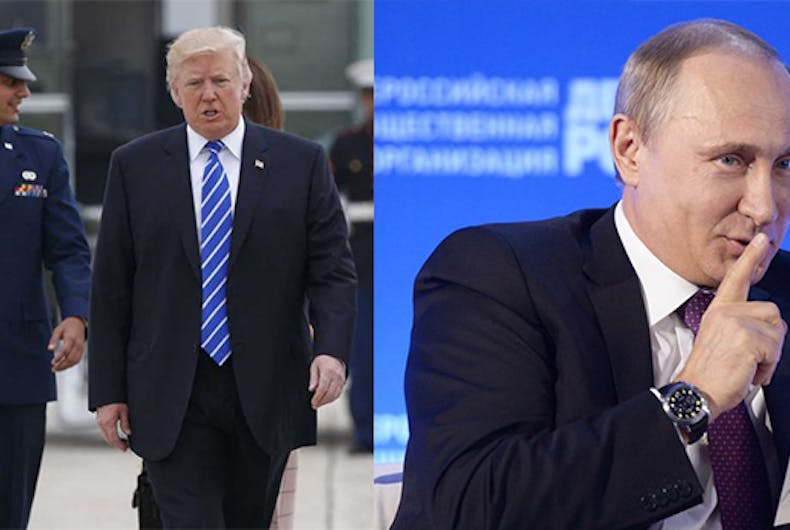 President Donald Trump is in Poland ahead of his trip to Germany for the G20 summit, where he will face world leaders with whom he has an icy relationship.

Trump’s decision to pull out of the Paris Accords, his demands that other countries pay their owed share into NATO (misunderstanding how it works), and his friendly and questionable relationship with Russian President Vladimir Putin have won him few friends on the world stage.

Putin and Trump will meet in Germany this weekend in what is one of the biggest and most highly anticipated meetings between leaders in recent history.

There is no scheduled list of topics, according to the White House, leaving us all to guess what will be discussed. An increasingly aggressive North Korea could come up, as well as the situations in Syria, and Ukraine.

Trump’s desire to give concessions to Putin in exchange for some of his own to boast about could also play a role, as reported by the Associated Press.

In particular, Russia wants its recreational properties in the United States back. They were seized by the Obama administration as punishment over meddling in the 2016 presidential election.

Interestingly, the United States wants Russia to reverse its anti-gay ban on adoptions to the country. Russia imposed the new rule in 2012, and it is unclear if they are considering overturning it. Perhaps they can be enticed by reports of Republican efforts to weaken marriage equality.

Speaking of, don’t expect Trump to follow his predecessor’s role and hold the country to account for putting its thumb on the scale for him. While if he does choose to bring it up he could point to it as “proof” that he cares about democracy, it would sound hollow coming from the man who publicly encouraged Russia to hack more of Clinton’s emails and make them public.

In fact, if anything, Trump is likely hoping Russia is already hard at work giving him an edge in his reelection campaign, which he has already launched.

Also don’t expect him to bring up the anti-gay and anti-bisexual abuses of men in Chechnya, who have reportedly been kidnapped, detained, beaten, and in some cases killed.

While U.N. Ambassador Nikki Haley has spoken out against the situation, and the House unanimously condemned it, the president has remained silent.

Trump has also never spoken out about the state-sanctioned discrimination of LGBTQ people in Russia, where a so-called gay propaganda law has been used to put a stop to demonstrations as well as pride rallies.

Trump’s own administration is not LGBTQ-friendly either, as evidenced by his appointments, his proposal to slash HIV/AIDS funding, weakening civil rights protections enforcement throughout the federal government, and the decision to stop standing up for transgender student rights.

“It is imperative that you forcefully raise this issue with Russian President Vladimir Putin when you meet him in Germany at the G-20 summit this week,” Griffin wrote. “I urge you to stand with the victims by calling on President Putin to take immediate action to bring the violence to an end and the perpetrators of these horrendous crimes to justice.”

While a noble effort, it is likely to go unheeded. Trump has already failed to bring up Chechnya in a meeting with Russian officials earlier this year.

He is instead using the time to inappropriately share sensitive intelligence secrets and admit that he fired former FBI director James Comey over the investigations into his campaign’s connections to Russia.

UPDATE: According to Secretary of State Rex Tillerson, Trump did raise the issue of Russian election meddling with Putin, The New York Times reports.

“He began by raising the concern of the American people of Russian interference in the 2016 election,” Tillerson said of Trump. “He pressed him more than once.”

Putin denied involvement, and Tillerson said the United States would work on a framework to get the Russian president to vow not to interfere with our elections in the future.

“It may be simply an intractable disagreement at this point,” Tillerson said.

No word on Chechnya.