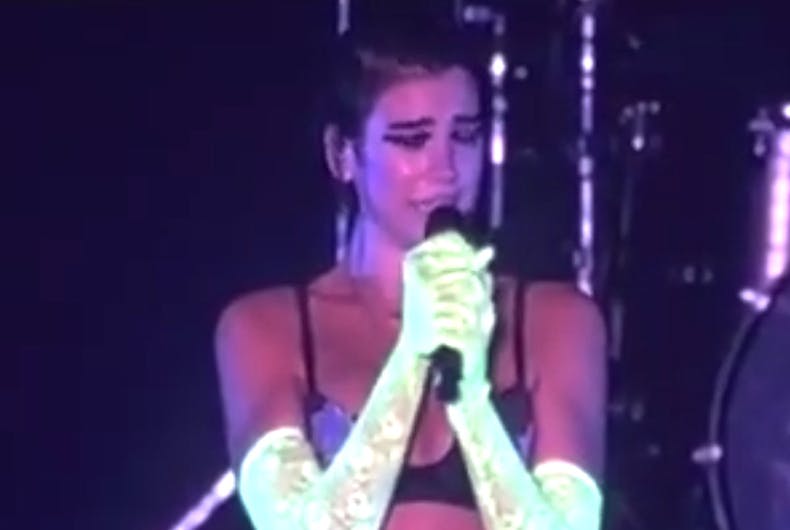 Britpop star Dua Lipa was left in tears as fans were dragged out of the venue for waving pride flags at the show.

She added, “We have only a few more songs. I would love in these last few songs for us to really, really, really enjoy ourselves. How about that?”

Some fans in attendance claimed to be removed just because they stood up or danced. Footage captured by fans at the performance show fans being forcibly removed by authorities.

The show was at the National Exhibition and Convention Center in Shanghai on the 12th of September. It was the singer’s first performance in the country.

The day after the show, Lipa took to social media to speak out bout the performance, focusing on the bravery of her fans, and her hopes for the future.

“I will stand by you all for your love and beliefs and I am proud and grateful that you felt safe enough to show your pride at my show. What you did takes a lot of bravery. I always want my music to bring strength, hope and unity. I was horrified by what happened and I send love to all my fans involved,” read the statement.”

“I would love to come back for my fans when the time is right and hopefully see a room full of rainbows,” she added.

Lipa, who calls her brand of music “dark pop,” is known for hits such as IDGAF and One Kiss.

I just CANT believe it. This is the show of Dua Lipa in Shanghai. All the fans are forbidden to stand out and could only sit on to see the show?!? If you don’t, the guard would use violence to kick u out. It’s unbelievable… #dualipa pic.twitter.com/quITZNLVxU

One more video…the girl was up on her feet so happy n thought they coming to interact with her, only to be smashed onto the ground and taken away.? Not every show in China is like this, it’s said @LiveNation instructed them to do so. We’re so sorry @DUALIPA had to witness. pic.twitter.com/Eo5XwOpsQY