Ellen DeGeneres is raising awareness of the Big Game this Sunday. No, not the Super Bowl, between the, um, Patriots and… uh… oh yeah, it says here, Falcons. Whatever! What Ellen, many of her fans and, let’s face it, most of us, will be tuning in for is Kitten Bowl IV.

The annual contest on the Hallmark Channel is billed as “the ultimate feline catstravaganza!” Playful kittens will dash across a cat-sized grid-iron and execute plays of unrivaled cuteness, as Ellen showed in the opening of a fun segment on Wednesday’s show.

Ellen sent Jeannie to Georgia Tech where followers on Twitter were encouraged to show up dressed as cats and bringing the biggest bowl they could find.

And for their efforts the 1,500 fans were given a chance to win tickets to that other Big Game, which does have the advantage of featuring men in very tight pants, if that’s what you’re into.

The three finalists were challenged by Ellen to compose an original song — or make up new words to an existing one — about why they should win two tickets to the Super Bowl in, wait, let me look… Houston!

All three were fun and creative and very, very, almost too enthusiastic, but the winner included two words that really touched Ellen and put her over the top to win the prize.

Watch the video below to see what she said that won Ellen’s heart, via EllenTube. 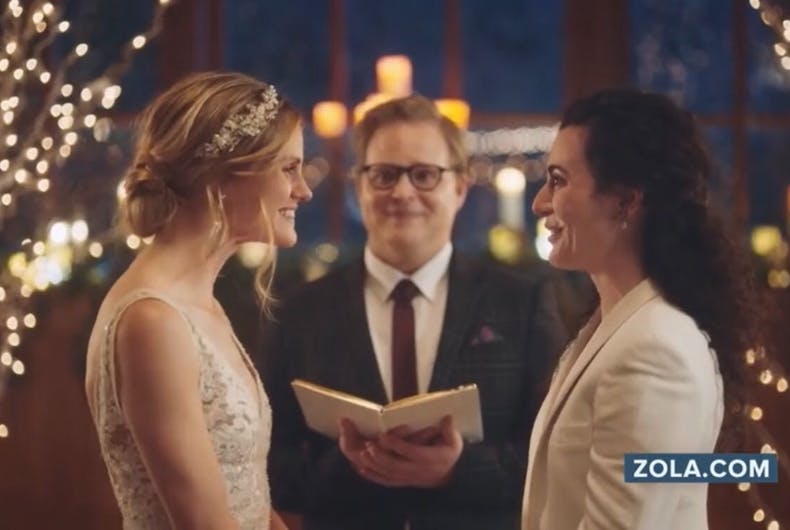 The same-sex couple featured in a promotional ad for Zola.com pulled by Hallmark Channel.Photo: Screenshot via YouTube Hallmark Channel president and CEO Bill Abbott is…

Cancel reply
Ellen kicks off Kitten Bowl IV, the big game for the rest of us