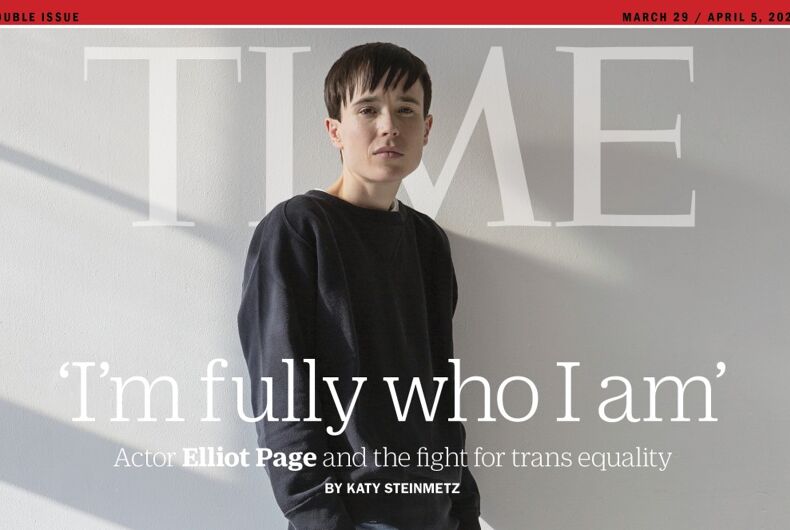 Elliot Page on the cover of TimePhoto: Time magazine

Academy Award-nominated actor Elliot Page just did his first long-form interview since he announced that he is transgender last year, and he explains how he came to understand his gender identity despite working in the film industry since he was a kid… and how the pandemic gave him the space to finally live his truth.

“I felt like a boy,” the star of Juno and The Umbrella Academy told Time, recalling when he was allowed to cut his hair short once when he was nine-years-old. “I wanted to be a boy. I would ask my mom if I could be someday.”

Related: A trans woman’s grandmother thanks Elliot Page for helping them by coming out: “I am proud”

He landed his first TV-film role when he was 10, playing a girl. He had to wear a wig and he grew out his hair.

And at that point, his appearance was no longer a decision he had full control over since he was a professional actor, landing roles in indie films in his teens, having to present as feminine for red carpets and other media events, and then acting in major Hollywood movies.

“I just never recognized myself,” Page said. “For a long time I could not even look at a photo of myself.”

In his late 20s, he came out as gay, something that he thought “was impossible” for a long time.

“There are pervasive stereotypes about masculinity and femininity that define how we’re all supposed to act, dress and speak,” Page explained. “And they serve no one.”

He felt more comfortable wearing suits and men’s clothing in public, but “the discomfort in my body” didn’t go away.

Then the pandemic happened. He isolated with his wife, Emma Portner, and had time to explore gender. He said he learned about transgender stars like Laverne Cox and read P. Carl’s memoir, Becoming a Man.

“I had a lot of time on my own to really focus on things that I think, in so many ways, unconsciously, I was avoiding,” he said. “I was finally able to embrace being transgender, and letting myself fully become who I am.”

In December, he publicly came out as trans, making him one of the most famous transgender people in the country. While he “was anticipating was a lot of support and love and a massive amount of hatred and transphobia,” he said, he didn’t expect the response to be quite so massive, to be the subject of scrutiny on rightwing podcasts but also have Hollywood directors reaching out to him for roles.

He announced his transition just as a massive anti-transgender campaign began in U.S. state legislatures. And he’s speaking out against what he called the “horrific” wave of legislation.

“My privilege has allowed me to have resources to get through and to be where I am today, and of course I want to use that privilege and platform to help in the ways I can,” he said.

Elliot Page knew he was a boy since he was 9. It took the pandemic for him to transition.