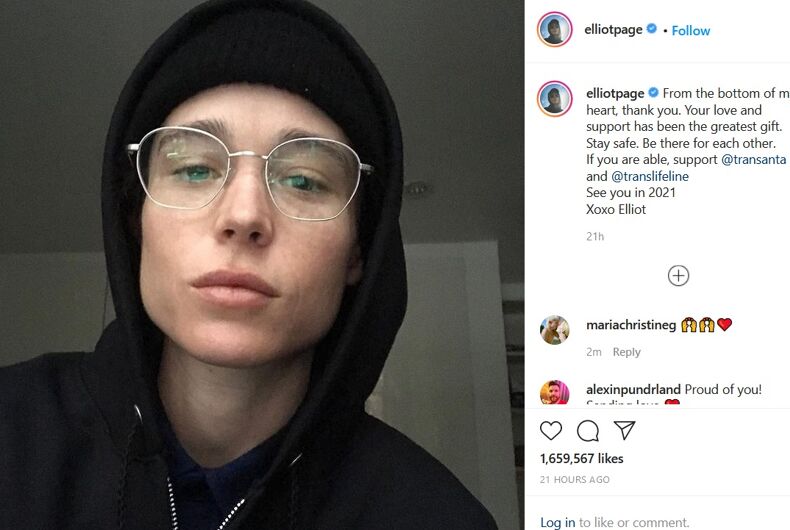 Academy Award-nominated actor Elliot Page is speaking out against a bill that would impose a penalty of up to 10 years in prison if a doctor provides appropriate, gender-affirming health care to transgender youth.

“Efforts to criminalize trans kids are deadly and we need to fight back against Alabama’s HB1/SB10,” the star of Juno and The Umbrella Academy tweeted. “Trans kids’ lives depend on stopping this bill. Tell Alabama lawmakers to #ProtectTransKids #NoHB1 #NoSB10.”

Related: Cop with trans daughter pleas for lawmakers not to criminalize her “hero” doctor

H.B. 1 and S.B. 10 in Alabama, or the “Vulnerable Child Compassion and Protection Act,” which would make it a felony punishable with 10 years in prison for a health care professional to provide gender-affirming care for a minor.

The bill would also make it a felony if teachers and school administrators don’t out possibly transgender students to their parents. The state is considering a separate bill to ban transgender youth from school sports.

The text of the bill claims that most minors diagnosed with gender dysphoria will stop being transgender by the time they are adults, which is false. The bill says that it’s necessary to support “natural puberty,” even though the effects of puberty hormones on a transgender person’s body can lead to increased dysphoria for the rest of their life.

The bill’s text says that treatments like puberty blockers – even after years of testing and administered by a doctor – somehow constitute “dangerous and uncontrolled human medical experimentation that may result in grave and irreversible consequences to their physical and mental health.”

Puberty blockers, like their name suggests, actually delay the onset of puberty so that transgender youth, their parents, and their doctors can have time to understand their identities and come up with the best path forward. If a trans person stops taking them, then they undergo puberty associated with their sex assigned at birth.

This isn’t the first time Page has used his platform to advocate for trans equality since he announced his transition last year. In January, he tweeted asking the Montana legislature last week to “Please vote no on HB 112 and HB 113. These bills harm trans youth and hurt all of us.”

The bills would ban transgender girls and women from competing in school sports and ban doctors from providing gender-affirming health care – like puberty blockers – to transgender youth.

“This bill would severely compromise positive health outcomes for trans youth,” reads a sample letter the ACLU of Montana is trying to get voters to send their representatives, an action that Page promoted in the tweet. “Denying best-practice medical care and support to trans youth can contribute to depression, social isolation, and self-hatred. Denying this care would likely raise suicide rates among young trans people in Montana.”