LOS ANGELES — The year was 2005. It was a modern twist to the age-old fairy tales: boy meets boy and they fall in love. But unlike the fairy tales of old, this story had a very tragic ending.

Shane Bitney Crone and Tom Bridegroom landed in Los Angeles pursuing careers in the entertainment industry, and along the way became a couple complete with a mortgage, a home, a dog, and a start-up business. But it wasn’t to be.

Six years later, on May 7, 2011, Tom, a working actor and part-time photographer doing a photo shoot on location, stepped backwards off the roof of a four story building.

The horrific accident cut short the life of the 29-year-old Indiana native, and with it, the life he was building with Shane.

And for the grieving Shane, the story of what happened after this accidental death, of how people without the legal protections of marriage can find themselves completely shut out and ostracized, became his stark reality.

The family of his love and partner barred him from participation in the memorial and funeral proceedings.

“We had been together for nearly six years when that happened and were absolutely committed to being together for the rest of our lives. We’d bought a home together. We’d started a business together. We’d adopted a dog together,” Shane wrote one year after Tom’s death.

“We dreamed of starting a family when we could, and getting married as soon as it became legal. Because we weren’t able to marry and because, young and feeling invincible, we hadn’t had papers drawn up that would’ve protected us if one of us died, I lost all claim to Tom after he fell.

“Tom’s parents, who were opposed to him being gay and opposed to our relationship as a result, had all the legal rights and I had none.”

Their story was one of the countless California same-sex couples who found themselves disenfranchised in the aftermath of the passage of Proposition 8 which barred same-sex couples from marrying.

In his grief, Shane was determined to fight back and take a stand — to show the nation and the world why equality matters, for all LGBTQ people.

His efforts led to his deeply heartfelt and emotional YouTube video released on the first anniversary of Tom’s death.

“It Could Happen To You” went viral and attracted the attention of Emmy-nominated producer and director Linda Bloodworth Thomason (“Designing Women”), who ironically, had met the young couple before the accident that claimed Tom’s life.

Thomason agreed to produce and direct a documentary film based on the couple’s story, and with a successful crowd-funding effort on Kickstarter.com that raised over $300,000., the film project took off.

The result, “Bridegroom,” debuted earlier this year at the Tribeca Film Festival in New York City to rave reviews, and garnered an endorsement from former U.S. President Bill Clinton.

“On one level (‘Bridegroom’) is a wonderful, sad, heartbreaking yet exhilarating and life-affirming story. And on another level, it’s a story about our nation’s struggle to make one more step in forming a more perfect union, for which marriage is both the symbol and substance,” Clinton said.

The film is a brutally honest “warts and all” story of Tom and Shane’s struggles growing up as young gay men and the adversarial familial relationships that the couple worked through together, presented in a montage of home videos, photos, original music, remembrances and a gripping documentation of the love story between the two.

In the film, with those personal pictures and interviews of family and friends, a portrait emerges of two men who were deeply in love with each other, and from the perspective of those who know the couple best, “they were the perfect match.”

In Washington D.C. for a Parents and friends of Lesbians and Gays (PFLAG) event this week, Shane spoke with LGBTQ Nation about the film.

“My hope is that it inspires and causes LGBTQ people to be proud of who they are. I am a firm believer that personal stories have the power to open hearts and minds,” he said.

Shane said he wants the principal message that love is love to be the focus.

He said that at screenings at various film festivals, he has been approached by many straight guys who tell him that their girlfriends made them come, but after watching the film, they have absorbed the truth behind his and Tom’s relationship — that love is not about being gay or straight, “it’s human thing.”

“If it gets more people off the fence, and let’s them see us, a people, then that’s it, they’ve gotten it,” said Shane.

“My hope is that the film will inspire people to live their lives honestly, to fall in love deeply, and to fight for the rights of people who are being treated like second class citizens,” he said.

“I hope that it helps parents love their children unconditionally and helps anyone struggling with their sexual identity to embrace who they are and to live a life free of shame. I want more straight guys’ girlfriends to have them go to see this film.”

Shane said he hopes the film gives viewers a greater perspective on the rights of LGBT people, given the current political climate with 14 states having legalized same-sex marriage, and a high probability of more states taking similar action this year.

“The thing personally for me — I’m not a political expert, and I am not expert on the gay rights movement — all I know is how things have affected me for not having access for those rights,” he said.

“There is the long road ahead for gay people until we will have marriage equality across the entire nation, but hopefully ‘Bridegroom’ can help — maybe reach goals a little faster state by state.”

“It’s too late for Tom and I to get married but it’s not too late for America to live up to its symbol of freedom,” he added.

“There is no freedom until we are equal. Love is love. Loss is loss. And at the end of the day we are all human and we all just want to be happy and treated equally.”

Shane said that that his message to policy makers is to come back to human side of marriage, and to take into account that “we just want to be happy, protected, pay taxes, and contribute to society just like everyone else.”

The trailer is here: 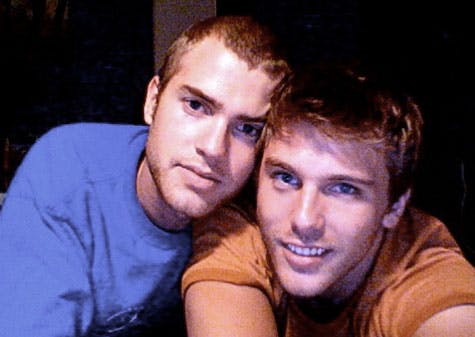 Shane Bitney Crone and Tom BridegroomPhoto: Just over a year ago, my partner, Tom Bridegroom, accidentally fell off a roof while taking photographs of our…

Cancel reply
For all these reasons and for every season… equality matters: ‘Bridegroom’