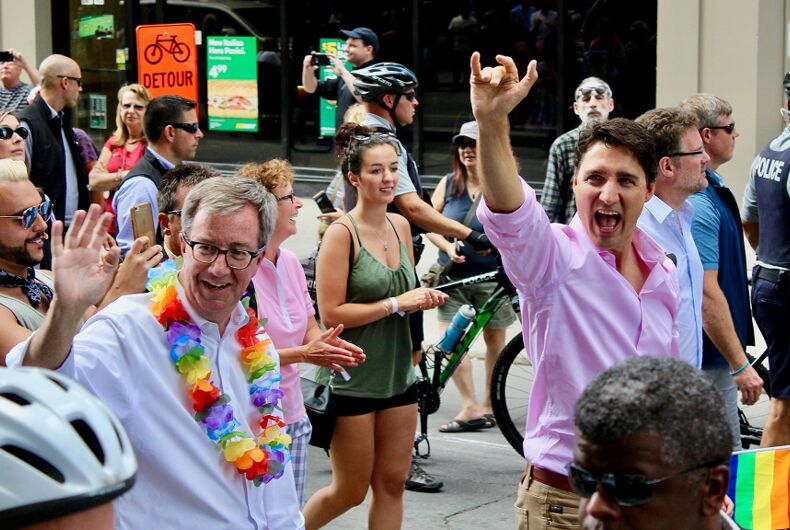 A homophobic slur was found spray-painted on the street outside of Ottawa Mayor Jim Watson’s home.

“It was a little disconcerting,” Watson told Newstalk 580 CFRA. “You go home and you want to feel safe and comfortable in your own home, but look, I’m not the only one. There’s, unfortunately, such an increase in hate crimes. We’ve seen it in Ottawa and we’ve seen it around the world.”

Related: Anti-LGBTQ graffiti was found on a Holocaust memorial

He said that he noticed the graffiti as he was leaving his home this past Sunday morning but that he didn’t read what it said because he was in a rush. It was his neighbors who pointed out that it was a homophobic slur and an explétive, and he realized that he had read it upside-down in the morning.

“It hits a little closer to home when it’s at home,” Watson said.

In the afternoon, police took pictures of it and started an investigation, and it was later cleaned from the street. On Twitter, Ottawa Chief of Police Pete Sloly said that the vandalism is being investigated as a hate crime.

“Our Service has no tolerance for hate crimes of any kind,” Sloly tweeted.

We are investigating an incident of hate graffiti reported to police today outside of the Mayor’s home. Our Service has no tolerance for hate crimes of any kind. Our Hate Crimes Unit has been engaged and this act, and all acts of hate, will be fully investigated.

“The mayor is disappointed that someone would spend any time and effort to attack someone’s sexual orientation and deface public property,” the mayor’s office said in a statement.

Canadian Prime Minister Justin Trudeau said that he was “appalled” by the act of hate.

“I’m appalled by the news that homophobic graffiti was written outside Mayor Jim Watson’s home,” he wrote. “There is no place for this ignorant and inexcusable hate in this city – or anywhere in our country. Jim, know that Canadians across the country are standing with you.”

I’m appalled by the news that homophobic graffiti was written outside Mayor @JimWatsonOttawa’s home. There is no place for this ignorant and inexcusable hate in this city – or anywhere in our country. Jim, know that Canadians across the country are standing with you.

While he’s been getting a lot of support after the vandalism, Watson said that he’s troubled that it happened at all.

“You know I often wonder why someone would go to that much trouble to be that hateful,” he said.

Watson also said that he was glad that the hate crimes unit at the Ottawa Police Department was reestablished in 2020.

“We’re a big city now,” he said. “We’re over a million people and with that, unfortunately, there’s a percentage of people who have a lot of hate in their heart and want to do harm through words or actions like spray-painting and so on.”

The police are “going to be busy and will be busy with lots of calls, but I think we just have to stand up against this kind of unacceptable behavior.” 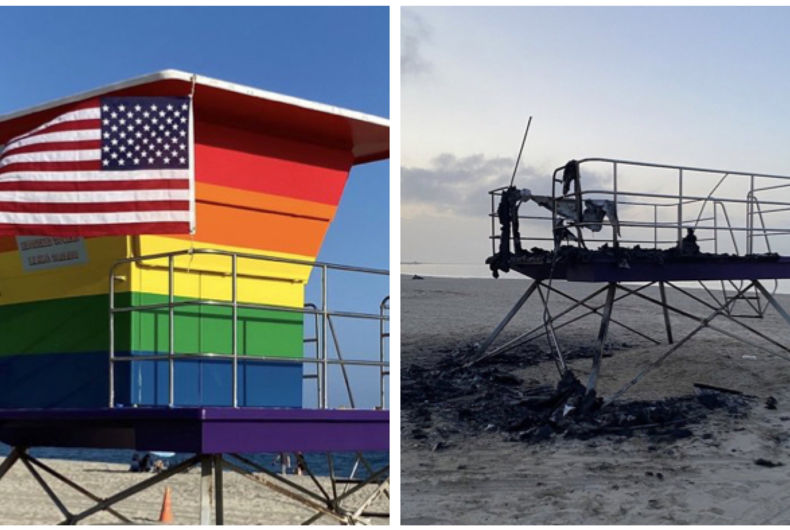 The Pride lifeguard station on Long Beach before and after the fire on March 23, 2021.Photo: Screenshot/Robert Garcia A fire has burned down a lifeguard…